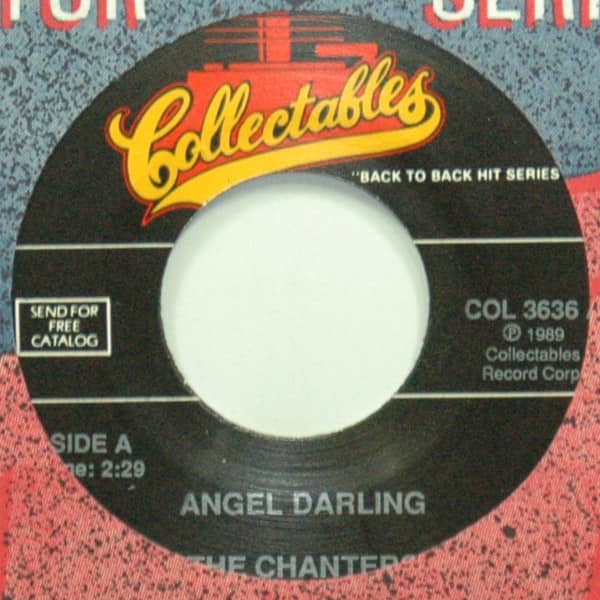 Learn more about Chanters
The Chanters No, No, No The high tenor kiddie sound remained a staple of the New York... more
Close menu
"Chanters"

The high tenor kiddie sound remained a staple of the New York vocal group scene. The Chanters were just as young as they sounded; two members were in junior high. Hailing from Jamaica, Queens, the quintet got together in late 1957. Tenors Fred Paige and Bud Johnson, Jr., baritone Eliot Green, and bass Bobby Thompson were joined by high tenor lead Larry Pendergrass.

The Chanters had an advantage: Bud's dad was well-known tenor saxman Budd Johnson. When the group was ready, the senior Johnson brought them to DeLuxe Records A&R man Andy Gibson, who supervised James Brown & The Famous Flames' Try Me (I Need You) (see Track 19). Gibson would be their producer at DeLuxe; Budd would lead the band. The group cut its first DeLuxe session in March of '58, the company pressing up My My Darling b/w I Need Your Tenderness that next month (Pendergrass led everything they did for DeLuxe except for one song).

A May date elicited their next DeLuxe offering, pairing Row Your Boat and Stars In The Skies the following month. Their final DeLuxe session was held August 4, 1958; Paige led Angel Darling, half of their next single from that date, while Larry fronted Five Little Kisses. That November, the company got around to pressing up the rollicking No, No, No from their final session, coupled with an interpretation of the pop chestnut Over The Rainbow, long a doo-wop perennial. It didn't do much business, and The Chanters were dropped by DeLuxe (being too young to tour didn't help their cause). They masqueraded as The Voices Five on Morty Craft's self-named Craft logo in 1959 without Paige, who'd entered military service and was replaced by Bud, Jr.'s cousin, Freddy Johnson. He led their interpretation of For Sentimental Reasons on Craft (Budd Sr.'s instrumental All Alone sat on the flip).

What resuscitated The Chanters' fortunes in 1961? Slim Rose's Times Square record shop was once again the source of the out-of-the-blue turnaround. He got The Chanters' DeLuxe output New York airplay, and demand for their platters convinced DeLuxe to repress No, No, No with a new flip, I Make This Pledge. No, No, No proved a #41 pop seller its second time around during the summer of '61. Alas, The Chanters didn't exist by then. Unlike The Capris, they didn't reform.