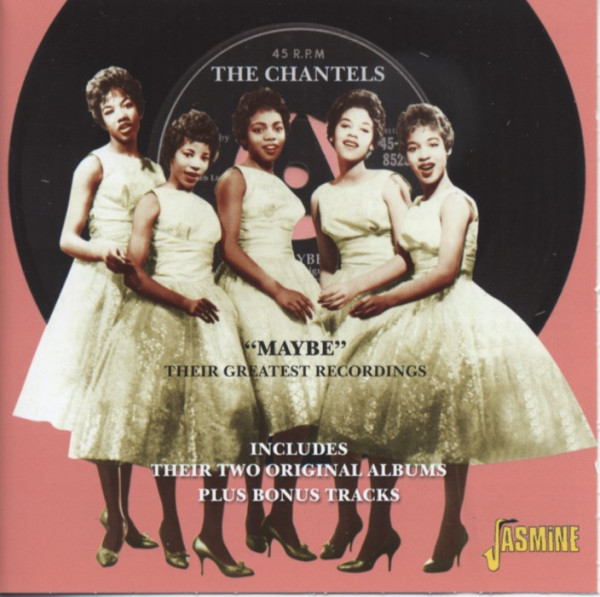 CD on JASMINE RECORDS by CHANTELS - Maybe - Their Greatest Recordings

Learn more about CHANTELS
The Chantels Look In My Eyes Like The Cleftones, The Chantels had started their... more
Close menu
"CHANTELS"

Look In My Eyes

Like The Cleftones, The Chantels had started their magical career under the aegis of George Goldner, in their case on his End label. They inaugurated End with a hit, He's Gone, in the autumn of '57. The blockbuster Maybe made The Chantels stars in early 1958, thanks in huge part to Arlene Smith's thrilling lead. The rest of the group consisted of altos Renee Minus and Jackie Landry and tenors Lois Harris and Sonia Goring. Along with The Shirelles, The Chantels were role models for the entire girl group movement.

The Chantels scored more hits on a somewhat lesser scale later that year with Every Night (I Pray) and I Love You So. In 1959, they backed their discoverer and A&R man Richard Barrett on his hit Summer's Love for Goldner's other logo, Gone. But change was afoot. Lois quit in the spring of '59 to finish her collegiate studies. More damaging was the loss of Arlene to pursue a solo career (she made a Phil Spector-produced 1961 single for Big Top, later turning up on his short-lived Spectorious label).

Barrett moved Annette Smith, the lead singer of The Veneers (another group he worked with that had a single on the Princeton label, Believe Me, later revived by the Skyliners,), into The Chantels front role and got them a new deal with former RCA Victor A&R man Joe Carlton's Carlton Records. Barrett still had the old magic as their Svengali, writing the breathtaking ballad Look In My Eyes for their first Carlton date in mid-'61. Released that August with Glad To Be Back on the flip, the quartet zoomed back onto the charts that summer when Look In My Eyes went to #14 pop and a lofty #6 R&B.

The Chantels encored that October with a jaunty Well, I Told You, a Barrett-penned answer to Ray Charles' across-the-board chart-topper Hit The Road Jack that made it to #29 pop late in the year. By the time The Chantels had a minor hit with Eternally on Luther Dixon's Ludix logo in early 1963, Sandra Dawn had supplanted Annette in the group's lead role. Arlene Smith became a Bronx school teacher. Landry died December 23, 1997 of cancer, but the remaining three original Chantels are still performing together regularly.