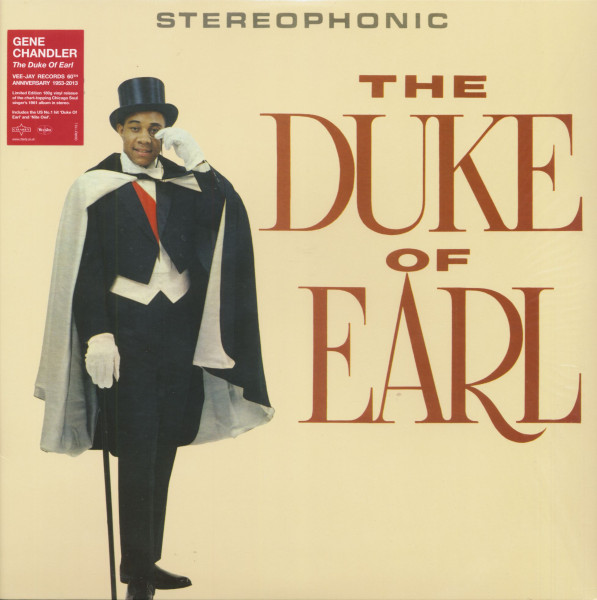 (Charly Records) 12 tracks, limited edition 180g vinyl reissue of the chart-topping Chicago Soul singer's 1961 album in stereo, celebrating Vee-Jay Records 60th Anniversary 1953-2013.​
-
The Cinderella story of The Duke of Earl is that seldom heard and often dreamed-of phenomena of a youngster rising out of obscurity and hurtling into fame and stardom within a matter of weeks. This meteoric ascent was virtually unmarked by the usual high voltage press agentry and hard sell promotion. The Duke rose right out of the hearts of young America who had listened to his first recording and found an immediate kinship.

The Duke of Earl was born in Chicago July 6, 1937. He loved to sing as a child and at the age of eight, he went on the stage. An only child, his love of music was encouraged and he sang at private parties and school affairs. Occasionally he worked on variety shows.

In December of 1960, a Mrs. Bernice Williams, who had taken an interest in the boy. took a home taped recording into the offices of Bill Sheppard. There was no music on the tape, just lyrics, and The Duke's voice rang true and clear. Sight unseen, he was signed immediately to a long term manager-recording contract. He was sent to music school, primarily to learn the little tricks of profes-sionalism. When the Sheppard organization felt sure that he was ready, they took the Duke into the studio and recorded the tune they had selected after listening to more than two dozen tapes and dubs; and The Duke of Earl was on its way.

Now the recording and the young man are household conver-sation throughout this country and in Europe. Recently, he flew into San Francisco for a benefit performance. Not even the Duke of Bedford could have received a more enthusiastic welcome. Amer-ican Airlines, in cooperation with The Chinese Chamber of Com-merce, staged a mammoth red carpet welcome at the airfield. More than 2,000 cheering fans greeted the plane. The arrival was cov-ered by two television stations and more than a half dozen national publications.

Hundreds of young Americans on the west coast and in the mid-west have painted their automobiles in bright day-glo colors With THE DUKE OF EARL stencilled across the sides. The fad is catch-ing on across ale country; and these fans may well prove to be the most effective promotion The Duke can have.

At this writing, The Duke is scheduled to appear in the Sam Kaplan production of 'Don't Knock The Twist' for Columbia Pictures. With him will be the world sensation - Chubby Checker. All the signs are good. At the present rate, there will be another world sensation - The Duke Of Earl

Gene Chandler (with The Dukays)

Had an East Coast record distributor not chosen a different song as a better bet for hitdom, The Dukays would have had a #1 pop/R&B smash. Instead, credit went solely to lead singer Gene Chandler - who didn't even exist until it was pressed up!

Chandler's actual name was Eugene Dixon. Born July 7, 1937 and raised on Chicago's South Side, he formed The Gaytones at Englewood High but left to join The Dukays, assembled in 1957 by second tenor Ben Broyles, baritone Earl Edwards, and bass Motee Thurston. They were named by a local barber (the group rehearsed at his shop). The Dukays stayed together while Dixon served overseas in the Army. When he returned in 1960, he brought in his cousin, Shirley Johnson, who sang first tenor. James Lowe came in as bass while songwriter Bernice Williams polished the group and penned what would become their debut release, The Girl's A Devil.

Carl Davis and Bill 'Bunky' Sheppard were fledgling producers with offices on the West Side. Williams brought them a tape of The Dukays in December of 1960. "I got with Bunky, and we listened to it," said the late Davis. At their first session at Chicago's Universal Recording, The Dukays waxed The Girl's A Devil and the Williams-penned ballad flip The Big Lie. The single came out on the Nat label, Dixon fronting both. The Girl's A Devil proved a #64 pop seller in the spring of 1961.

For their encore date at Universal, the group readied the Williams-penned rocker Nite Owl and a lovely ballad, Festival Of Love. Then Davis overheard the group rehearsing outside his office. "They were out there doing this 'Doo-doo-doo.' And I said, 'What is that?' And they said, 'Oh, this is for the next session.' I said, 'Oh, no. Whatever that is it's a smash.' So we're gonna do that on this session," hesaid. "They went home and got together with Bernice, and they started writing the lyrics. They called me at home, and they were saying, 'If a guy is a king and he owns a lot of land, what is it?' I said, 'Well, that's a kingdom.' And they said, 'What if it's a duke?' I said, 'Well, it's a dukedom!' They finished writing the song and got it ready."

Next assignment: choosing which songs would constitute their Nat encore. New York distributor Bill Lasley decided that. "He listened to all four songs, and he sent two of them back," said Davis. "He said, 'I want 'Nite Owl,' and whatever was on the flip side.' And he sent back 'Duke Of Earl.'"  Bunky peddled the remaining pair (Kissin' In The Kitchen was the flip) to Calvin Carter, A&R man for Chicago's far larger Vee-Jay label. "Calvin fell in love with 'Duke Of Earl.' And Ewart Abner, who was running the company, was in England. So he called Abner in England and said, 'Man, Carl and Bunky have come up with a smash!'

"When we decided that we were going to split up these four sides, I met with the whole group," said Davis (Nite Owl made it to #73 pop on Nat in early '62). Carl told The Dukays, "We want to put these other two out. Everybody's going to get paid the same, but we just want to name these two different. Y'all got two records out there. We were going to start off with Eugene Dixon. That was his real name. And I said, 'I don't like that at all.' My favorite actor was Jeff Chandler. He used to play Cochise in the movies. So I said, 'Why don't we do that? Why don't we just cut your name from Eugene to Gene, and then use Chandler as your last name?'"  Vee-Jay put it out in October; in early January it was the top pop single in the country.The newly christened Gene Chandler donned a top hat, cape, tux, and monocle to lip-synch Duke Of Earl in the film musical 'Don't Knock The Twist.'

With Davis producing, Chandler became a soul star, posting a steady stream of hits on Vee-Jay, Constellation, Checker, and Brunswick (without Davis, Gene went gold with Groovy Situation for Mercury in 1970). The Dukays picked up Charles Davis as new lead tenor; their Please Help looked promising on Vee-Jay during the spring of '62 but didn't make the charts. Davis later changed his name to Nolan Chance when he went solo. 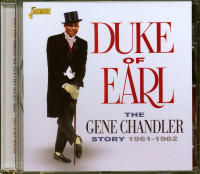 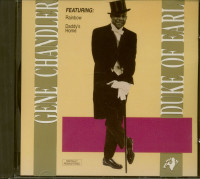 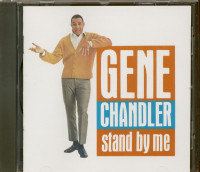 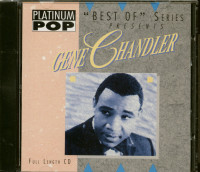