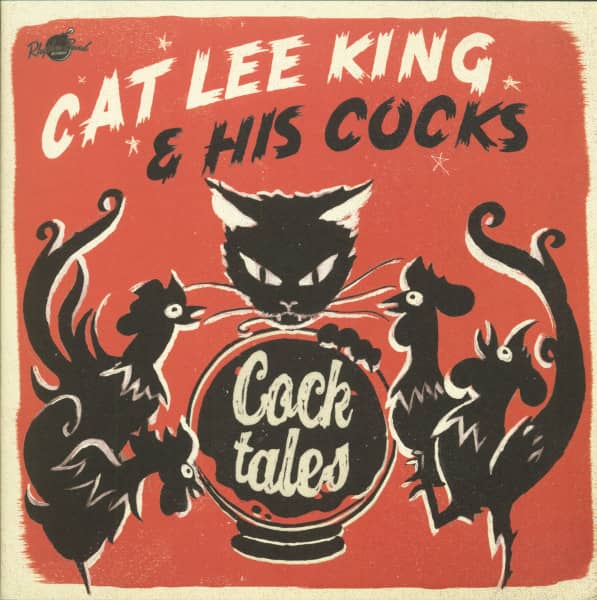 (Rhythm Bomb Records) 14 Tracks - CAT LEE KING is already known as a musician in RAY COLLINS' HOT CLUB, the pianist with the deep black voice has with TOMMY J. CROOLE (lead guitar), SIDNEY RAMONE (rhythm guitar), LUCKY LUCIANO (double bass) and RENÉ LIEUTENANT (drums) a hot band at the start, which made its debut in two days in the Essen ROCKET LAB studio on the analog tape. A lot of joy in playing and a lot of background shouts make the recordings seem very lively. Cock Tales" is also a true cornucopia of the classical rhythm'n'blues, which works without any problems with this band. Memphis Style, Jump'n'Jive, Swing'n'Shuffle, a touch of Rockabilly and Rock'n'Roll - the songs are full of style awareness and form an exciting, varied round dance through the 40s and 50s. The fact that these guys are only in their twenties and also perform live gives hope for a long and glorious future. A German vintage rhythm'n'blues formation hasn't entered the scene so convincingly in a long time.

The name of this Rockin' Blues Quintet from Bonn, Germany, will elicit a slippery joke from many an Englishman. But not only the name stands out, because this band is young, authentic and extremely talented.

Frontman Cat Lee King has already caused a sensation in several formations with his bluesy grater voice and his nimble piano playing. Since 2014, however, he has devoted himself above all to his main project Cat Lee King and His Cocks. The roots of this band are mainly black. Among the most important musical role models are such greats as T-Bone Walker, Wyonnie Harris, Ray Charles, Otis Spann, Muddy Waters and BB King.

Cover versions like Don & Deweys Farmer John, Herby Joe's Smokestack Lightnin' or Chuck Berry's Brown Eyed Handsome Man alternate in their sets with a lot of their own songs that sound like they were written somewhere between Texas, Chicago and New York between 1949 and 1960.

Unlike many bands in this genre, Cat Lee King and His Cocks do not play trumpets, saxophones etc.. Instead her Rhythm & Blues convinces with two razor-sharp guitars and driving bass/drum rhythm next to the piano. Responsible for this are Tommy J. Croole (lead guitar), Sidney Ramone (rhythm guitar), LuckyLuciano (double bass) and Rene Lieutenant (drums).

All five are in their early 20s and have already achieved a lot (e.g. at the Rhythm Riot in Camber Sands/England). But they have much more to do! Her first album was released in 2018 on Rhythm Bomb Records,'Cock Tales'!