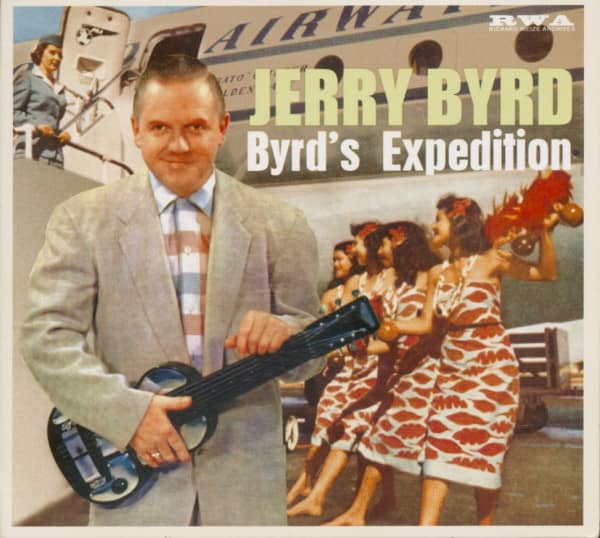 Features stellar support from guitarists Zeke Turner and Chet Atkins. If pedal steel virtuosos Speedy West, Buddy Emmons, and Bud Isaacs played to your head and your feet, then lap steel master Jerry Byrd (1920-2005) played to your heart. DeWitt Scott, the late founder of Steel Guitar International in St. Louis, honored him as 'the master of touch and tone.' Jim Crockett, longtime editor of 'Guitar Player' magazine, hailed him as 'he last great non-pedal steel guitarist.'

Jerry Garcia of The Grateful Dead once flew to Honolulu, hoping Byrd would take him on as a student. So did blues player Jimmie Vaughn and his celebrated younger brother, Stevie Ray. While Byrd has been well-represented on compact discs, those releases primarily capture an older, contented artist entertaining tourists in Waikiki lounges. Some reissues reflect Byrd's years on MONUMENT RECORDS, mostly ambitious 'space age pop' productions that show their age. For decades, steel guitar enthusiasts and country record collectors have longed for a reissue of Byrd's timeless country material, particularly the instrumentals he recorded for MERCURY between 1949 and 1954.

The majority of them appear here, along with a healthy sampling of Byrd's Hawaiian stylings. No reissue of Byrd's MERCURYs would be complete without Steelin' The Blues and its vocal refrain by Western balladeer Rex Allen. The earliest sides feature Byrd's Cincinnati-based band, including Zeke Turner on electric lead guitar, Louis Innis on rhythm guitar and Tommy Jackson on fiddle. This band helped define the classic 'honkytonk' sound that dominated country music from 1947 until the mid-1950s. It appeared on such juke-box hits like Red Foley's Tennessee Saturday Night and Hank Williams' Lovesick Blues.

The later sides capture Byrd's early Nashville years, often with support from Chet Atkins. Dave Samuelson's notes provide an overview of Byrd's early fascination with the steel guitar, his years on radio and record, his eclipse by a young generation of Nashville pedal steel stylists, and his musical rebirth in the Hawaiian islands.