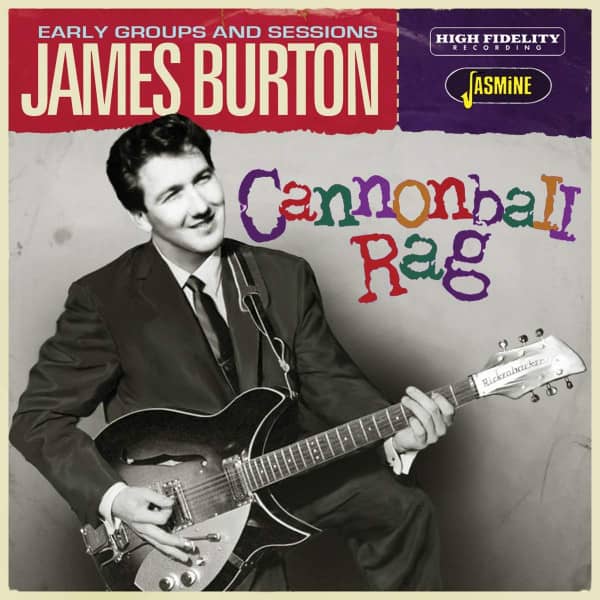 James Burton, like Roy Buchanan and Al Casey, was one of the group of influential rockabilly guitarists who survived through to the present with session work, and thus played a lnajor part in the West Coast country-rock scene of the Six-' ties and Seventies. He first appeared as a guitarist in Shreve-port, Louisiana, and recorded with Dale Hawkins whose `Suzie Q' on Checker was a rocilen'roll hit in 1957. The heavy, deliberate, and — for its time — very inventive guitar work enabled Burton to gain work on the West Coast and he soon joined the band of the young Ricky Nelson. Burton's `Sun-style' electric lead picking was an important factor in the success of Nelson's discs, and the solos on Waitin' In School', 'Believe What You Say' and 'Bucket's Got A Hole In It' were definitive statements of the Carl Perkins, Scotty Moore guitar school.

Burton remained with Nelson into the Sixties , and has guested on guitar with successive waves of post-Byrds country-rockers, including the new-style Everly Brothers, Mike Nesmith, Delaney and Bonnie and Gram Parsons. He cut a solo album for A & M. In 1969, he backed sent some demos to Pappy Daily, a veteran Houston distri-butor, who signed him to a recording contract and in 1957-8 he recorded two hillbilly singles under his real name for Mercury. In 1958, Richardson recorded a novelty song titled 'The Purple People Eater Meets The Witchdoctor' under his Big Bopper alias, but it was the flip, 'Chantilly Lace' which registered internationally, reaching the Top Ten in America and the Top Twenty in England.

He followed this in December, 1958, with 'The Big Bopper's Wedding' (a Top Thirty record in America) before he died with Buddy Holly and Ritchie Valens in a plane crash on February 3, 1959. Richardson's small legacy of recordings suggests that he was a talented songwriter - he wrote Johnny Preston's `Running Bear' for example - rather than an artist of any durability.

This product will be released at 1 November 2021