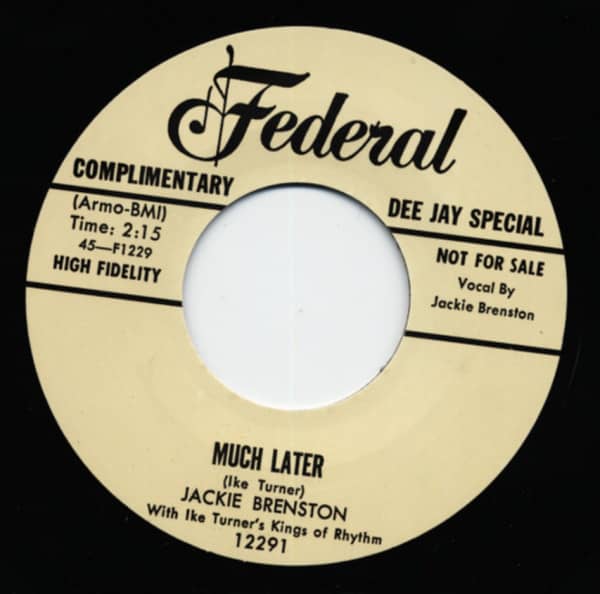 Jackie Brenston and His Delta Cats

Ike Turner and his Kings of Rhythm amused themselves with a little game to help pass the time as they drove from one gig to the next.

"We just used to count cars on the road," said the late Turner. "We used to bet. Once somebody bet 'I see more Dodges,' somebody bet 'I see more Oldsmobiles.' 'More Fords.' We used to bet a quarter or something, riding to gigs. And each one of us would pick a car, and see which one passed us the most on the highway between Clarksdale and Greenville, Mississippi. We'd count all the cars, see which was the most. There was a lot of 'em then."

That exercise was the inspiration for the creation of Rocket '88' often cited as the first rock 'n' roll record. Cut March 5, 1951 at Sam Phillips' fledgling Memphis Recording Service, it bore all the hallmarks of the future genre: lyrics extolling a cool, fast auto, a pounding backbeat and a four-on-the-floor groove, and Willie Kizart's extraordinarily distorted guitar, the result of his amp enduring a rainstorm. "The drums, the stuff fell out of the car," said Ike. "It was tied with the trunk open, and the bass on top of the car. The amps and things got wet."

The session marked the Kings' first trip to cut for Sam. "We were just excited that we were gonna record," said Turner, who laid down two vocals of his own and played piano throughout. But Rocket '88' was sung by the band's saxist Jackie Brenston, born in Clarksdale, Mississippi on August 15, 1930. "Jackie was more alto and baritone," said Turner. "Jackie would play more Louis Jordan's kind of stuff." Phillips sent the tape up to Chicago's Chess Records for release. The Kings were renamed the Delta Cats on Rocket '88,' a #1 R&B smash that summer

Consisting of Jackie, Ike, Kizart, tenor sax soloist Raymond Hill, and drummer Willie 'Bad Boy' Sims, the Kings/Cats had formed in Clarksdale. "There was two bands. We had one big band, which was the Tophatters. And then we had the Kings of Rhythm. The ones that could read music, they played more jazz when we broke up into two groups," said Turner. "And then the ones that couldn't read, we changed ourselves into the Kings of Rhythm because we kept up with the jukebox. Whatever was hot on the jukebox, that's what we played."

Brenston didn't last long in his first stint with the band. He got a big head when Rocket '88' blasted off, leading to his departure after his blistering encore My Real Gone Rocket. Recording with Memphis bandleader Phineas Newborn Sr.'s band and then in Chicago, Jackie watched his remaining Chess outings stiff. By mid-decade he was back in the ranks of the Kings of Rhythm, hopefully a wiser man.