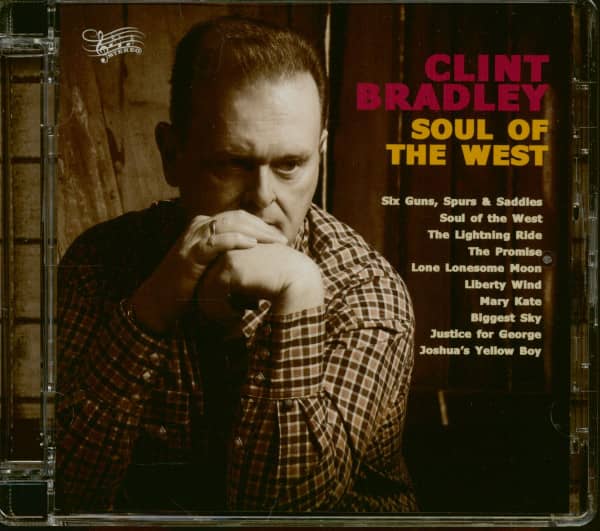 (Bluelight) 10 tracks
Welcome to “Soul of the West” the second albumof western music, written and recorded by Clint Bradley. Clint’s first acclaimed western album “Riding After Midnight” (BLR 33171) was released in 2014 and  quickly  established  him  as  a  new  force  within  the  genre.  Critics  have universally agreed that he has taken western music to another level, and indeed some of his own  songs  from  that  album  are  already  establishing  themselves  as  modern  western  music classics.

He has been nominated for awards both in Europe and the USA; and during the last couple of years “The Clint Bradley Band” have established themselvesas  one  of  the  must  see  live  acts  onthe scene! As  with  “Riding  After  Midnight” “Soul of the West” is a completely acoustic  affair,  recorded  with  the superb  “Clint  Bradley  Band”  Co-Produced  again  by  Darren  Allison and   Clint,   great   effort   has   been taken to  bring   out  the  all   finest aspects  that  acoustic  instruments have  to  offer.  The  format  of  the album    is    completely    pure    and human with no artificial components whatsoever used.

Everyone  involved  in  the  recording agrees that it was an absolute joy to be  part  of  the  sessions,  there  was such an atmosphere in the studio as the recordings went down, and a unanimous feeling thatsomething very special had been captured!This album  consists entirely  of  original  compositions,  written  by  Clint  Bradley.  You  will  hear collection of songs reflecting all the corners of his influence, from a lifelong love and passion for western music to the environment in which he lives and some of the darker aspects of the world he sees around him. There is no point in editing your own  soul he says, sometimes you write a song on the spur of the moment directly after a personal experience or that of someone close to you, another time you write with a smile and the simple joy of the place you are in at that moment.

There is no reason why western music can’t have an edge! 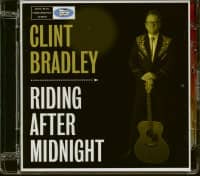 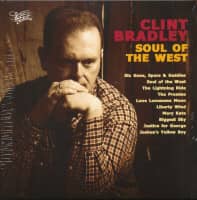