Wishlists
Categories
Information
Article successfully added.
This article is deleted and can no longer be ordered!
Please inform me as soon as the product is available again.
P Secure bonuspoints now
Description
Learn more about Johnny Bond
Review 0
Description
CD on JASMINE RECORDS by Johnny Bond - The Heart And Soul Of The West (CD) more
Close menu

Johnny Bond: The Heart And Soul Of The West (CD)

Article properties: Johnny Bond: The Heart And Soul Of The West (CD) 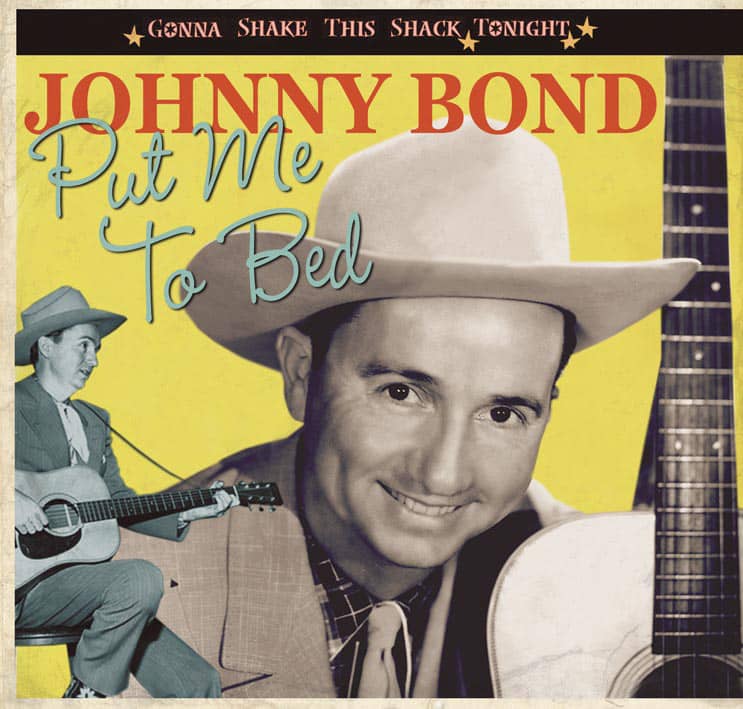 For thirty years, Johnny Bond was primarily associated with singing cowboys and their music, first with Jimmy Wakely, then as Gene Autry's radio and stage-show sidekick, and, later still, as business partner and associate of CMA stalwart Tex Ritter. Yet, he still managed to carve out an identity of his own as a recording artist and performer without becoming identified with one specific style or performing image. As a composer, he wrote enough genuine classics to be elected to the Nashville Songwriter's Hall of Fame. As a musician, his distinctive bass guitar riffs are heard on hundreds of country hit recorded in Hollywood and Los Angeles from the 40s through the 60s. As a comedian, his droll sense of humor was perfect for the years as a sidekick to Autry as well as the long string of novelty songs and recitations he had so much success with over the years. As a solo recording artist, he had eight Top 10 hits, culminating with the crossover hit Ten Little Bottles in 1965.

Born Cyrus Whitfield Bond on June 1, 1915, in the Enville community and reared in south-central Oklahoma, Johnny taught himself to play, first, a mail order ukulele and then a borrowed guitar and banjo. His schoolteachers and classmates often made fun of his love of hillbilly music and his fervor for his idol, Jimmie Rodgers. He played a horn in his high school band, although his heart was with Rodgers, Milton Brown and his Brownies and The Light Crust Dough Boys who he was following on the radio. While still in high school, Johnny began performing professionally in the area. After finishing high school in 1933, Johnny went to Oklahoma City, moving in with his brother Howard.

Hoping to find success in radio as a solo act, first as Cyrus Whitfield and later as 'Johnny' Whitfield, Bond paid his bills playing in a local dance band, Billy McGinty's Oklahoma Cowboys. He also enrolled at the University of Oklahoma just in case the hoped for musical career stalled and did not develop. In 1937, as Johnny Bond, he joined Jimmy Wakely and Scotty Harrell to form a smooth cowboy trio called The Singing Cowboy Trio and they broadcast over radio station WKY. They soon changed the name of the trio to The Bell Boys, taking the name from their radio sponsor, the Bell Clothing Company.

It was during this period that he began seriously writing cowboy and country songs. One of his compositions, the soon to be classic Cimarron, was recorded by the trio for radio station KVOO transcriptions. The trio heard that Gene Autry was playing in Lawrence, Kansas, and went there in hopes of getting an audition with him. Autry listened to them and told them that he might be able to help them if they came to Hollywood. In 1939, they went to Los Angeles and with Autry's help were cast in a Roy Rogers film, 'Saga Of Death Valley,'for Republic Pictures (billed as Jimmy Wakely and his Rough Riders).

After returning to Oklahoma to assess their future, they decided to make the move to California permanently. The potential of the movie work (Republic had offered more work) was particularly interesting to Wakely and Bond, and an offer from Autry to join his show was very difficult to ignore. Initially, Scotty Harrell declined to go, so Columbia Records recording artist Dick Reinhart replaced him. In late May 1940, they made the move to California. In September, now known as the Jimmy Wakely Trio, they joined the cast of Gene Autry's Melody Ranchradio show that was broadcast over the CBS network. Shortly after they arrived in California, Scotty Harrell had a change of heart and rejoined the group, and the four, in various trio configurations continued to work together for several years.

It is ironic, given the success of the Jimmy Wakely Trio on radio (including a series of radio transcriptions) and later in a number of cowboy movies and B musicals, the Trio never recorded for a major label.  However, each member would have a great deal of success as solo recording artists. Reinhart was already recording for Columbia Records when they made the move and it was Bond –not Wakely- who was the first member of the remaining trio to get a recording contract of his own. Art Satherly of Columbia Records, who'd previously signed Gene Autry, Tex Ritter, Leadbelly, and a dozen other music legends to recording contracts, got Bond under contract in 1941, and his first recording sessions were held in August of that year. One of the highlights of those first sessions was a song he wrote, I'm Pounding The Rails Again, an up-tempo country-blues song, featuring Jerry Adler's harmonica, Jimmy Wakely and Dick Reinhart on guitars.

Johnny seldom toured to promote his own records, but from 1940 to 1956, he was the lead guitarist for Gene Autry, and toured the world as a featured performer with Autry's show. From his first few months in Los Angeles, Johnny became one of the busiest sidemen and session leaders. Johnny appeared in over forty movies and, in addition to Gene Autry's Melody Ranch, he was a regular cast member on the Hollywood Barn Dance, another CBS radio show, while appearing steadily on local and regional country music radio shows.

In the beginning, Johnny was recording a bluesy style country music before shifting toward western swing and honky-tonk. A prolific songwriter, and one not afraid to adjust and adapt to new and different trends, Johnny recorded a number of songs over the next five years, none of which could be considered a hit, but several did sell very well. Johnny successfully experimented with boogie woogie during the late 40s and early 50s. In recording these songs, Johnny had no qualms about experimenting with the various instruments, especially with the hot harmonica of Jerry Adler and the steel guitar of Pete Martinez, Speedy West or Noel Boggs. He also took full advantage of the outstanding piano work of Bill Wardle.

1947 was the breakout year for Johnny Bond as a recording artist when he produced three 'Top 5' songs. He also recorded three boogie woogie sides, two of his own compositions and one, Bartender's Blues, written by his good friend Fred Rose. In 1941, Rose had urged Bond to expand his songwriting and move away from the cowboy, western and nature songs that were dominating his writing. The immediate result was I Wonder Where You Are Tonight, a song destined to become a country standard.

Beginning in 1949 and going until the end of his association with Columbia Records, nearly every Johnny Bond recording session produced at least one up-tempo boogie woogie or honky-tonk song; or, by the mid-50s, a rockabilly or rock 'n' roll song. A sly, lively sense of humor runs throughout Bond's music, and the ease with which he adapted the beat into his music shows that he didn't seem threatened by the changing trends.

Some of the finest of the boogie sides Johnny cut are featured in this collection. A couple of the best are his own compositions, Put Me To Bed and Barrel House Bessie. Both feature Bill Wardle on the piano, while Pete Martinez and Speedy West, respectively, are featured on the steel guitar. Jerry Adler's hot harmonica is also outstanding.

In the early 50s, he built his own home studio and began to experiment with overdubbing himself using two Revox mono tape recorders. He would often call on some of his old friends, Jimmy Wakely, Wes Tuttle, Eddie Dean among them, to come in and offer instrumental and vocal support. Several of the recordings from his home studio were released by Columbia. One, Wildcat Boogie, is a fine example of these.

When Nashville began to dominate the charts, Johnny began recording there as well as Hollywood. With Don Law producing, he cut a number of fair selling records but never was able to get that big selling 'hit' record. By the mid-50s, Johnny's music had moved to honky tonk and he had begun to experiment with the emerging rockabilly and rock 'n' roll.

In 1955, he recorded Sheb Wooley's Louisiana Swing in Hollywood, but with a very definite Nashville influence. Leading off with a fiddle intro by Margie Warren in place of the traditional guitar opening usually featured on west coast records, and featuring Joe Maphis' 'flying fingers' electric guitar, this up-tempo honky tonk song comes very close to rockabilly, and may be the best Johnny Bond Columbia release of the period. It was an outstanding record, which was reviewed very well in the trades, but still, it didn't sell.

By 1957, it had been over six years since Johnny had a song on the charts, and Columbia decided not to resign him. He was disappointed, but as he says, he may have precipitated the move by pushing the label hard to release an album. Although Johnny often maintained that the most satisfying aspect of his career personally was the recording, he also understood that it was the other elements of his career that likely kept him from achieving the success he hoped for.

As mentioned, he seldom toured to promote his records. Beginning in 1953, Johnny focused his career on television. He joined The Town Hall Party as a regular performer and primary writer in 1953, and stayed with the show until its demise in 1962. In the mid 50s, he served in the same capacity on the syndicated Ranch Party, a spin-off from the Town Hall Party that featured his friend Tex Ritter as the host. In the early 60s, Johnny became the host/writer of the syndicated Melody Ranch Show for Gene Autry.