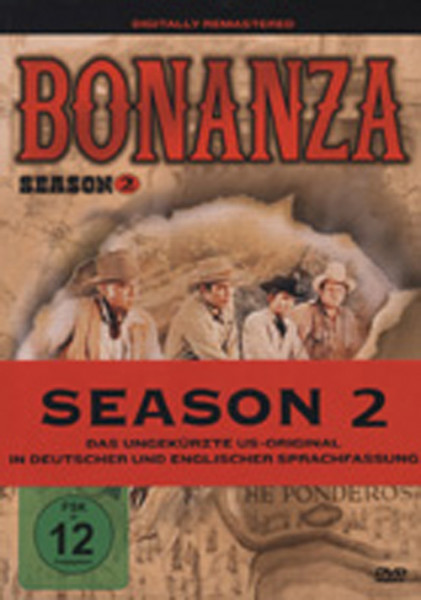 This article is deleted and can no longer be ordered!
Please inform me as soon as the product is available again.
P Secure bonuspoints now
Description
Learn more about Bonanza
Review 0
Description
34 Episoden 1960/61 - 1560 Minuten more
Close menu

Learn more about Bonanza
Bonanza A western in the waning days of the once dominant American television genre,... more
Close menu
"Bonanza" 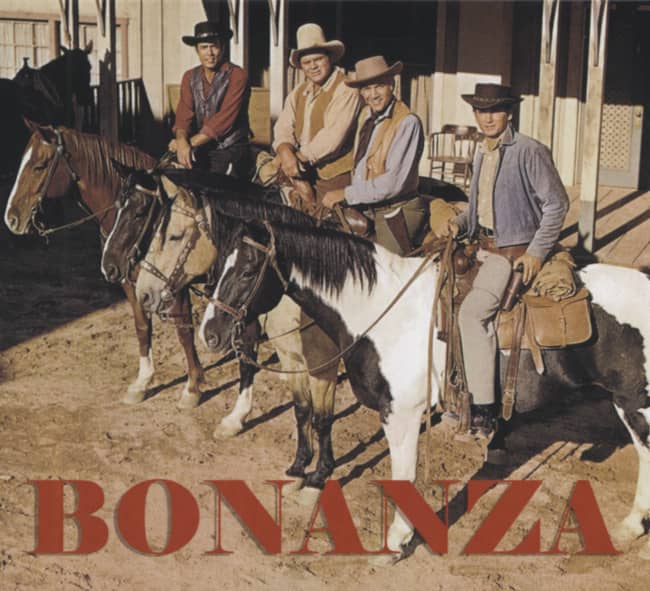 A western in the waning days of the once dominant American television genre, 'Bonanza' was built around a patriarchy headed by a man who was an empire-builder, though one with a singularly unfortunate love life.

Ben Cartwright, builder and owner of the sprawling 1,000-square mile Ponderosa Ranch near Virginia City, Nevada, had three sons. The eldest, Adam, was dark, quiet and thoughtful. Eric 'Hoss' Cartwright, the middle son, was bulky, a bit clumsy, and perhaps larger of heart than of brain. And the youngest, 'Little Joe,' was wild-eyed and rambunctious. None of the three resembled either of his brothers; this was explained by each having had a different mother. Being married to Ben Cartwright, it seemed, was no guarantee of a long and healthy life.

In reality, actors Pernell 'Adam' Roberts and Dan 'Hoss' Blocker were born about six months apart, and were only thirteen years younger than their 'father,' portrayed by Lorne Greene. Michael 'Little Joe' Landon was 21 years younger than his 'father' -- who was 45 when the series began, on September 12, 1959 but appeared to be much older.

As immense as the Ponderosa may have been, it functioned with a minimal staff – the Cartwrights, Chinese houseman Hop Sing (Victor Sen Yung), with the occasional ranch-hand. If there was fence to mend, or horses to break, chances are that a Cartwright or two would handle the situation. (Later in the series, a number of additional regulars appeared as actors portraying the original Cartwrights left the program; nobody gave them any credence then; nobody remembers any of them, today.)

So ludicrous was the story, 'Bonanza' – filmed luxuriously by the standards of the day, as a showpiece for the then-new medium of color television – should never have been a hit. Yet it became an international sensation, the second longest-running western (after 'Gunsmoke') on American television, and continues to be seen every day, in re-runs.

Perhaps the success had to do with what distinguished 'Bonanza' from its predecessors. While there was a fair amount of action and gunplay, 'Bonanza' was, at heart, a family drama.

For all the size of The Ponderosa, most of the drama on 'Bonanza' focused on the Cartwrights, as they dealt with the townsfolk, itinerant guest stars, and one another in various combinations. Sometimes, Little Joe would be the main character; sometimes, one or more of the others; and occasionally the family would band together to solve a problem or deal with some rotten varmint, usually of the two-legged variety.

In those days, networks were more likely to give a show a chance to catch on then they do now. 'Bonanza' failed to attract an audience for much of its first two years. Then, when NBC moved them from Saturday to Sunday night, the show exploded – for three seasons, it was the most popular series on television, and it remained on the air through 1972 despite the loss, through the years, of two of the Cartwright sons.

And of course it didn't hurt to have a thrilling theme song, written by veteran Hollywood tunesmiths Jay Livingston and Ray Evans (in one version, the 'Cartwrights' sing lyrics; the most familiar rendition is an instrumental, featuring Joe Maphis's lead guitar). 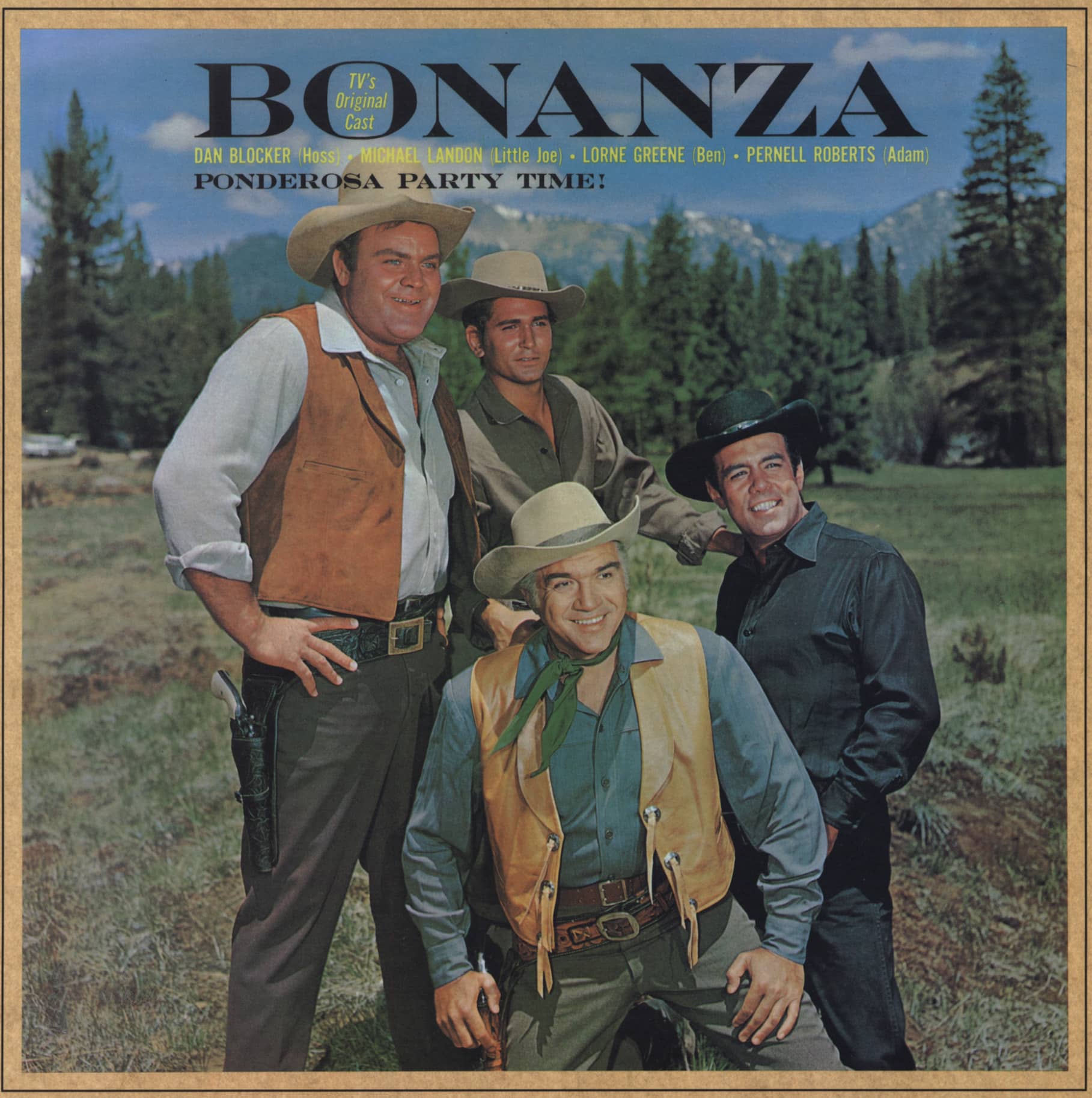 Lorne Greene was born on February 12, 1915 in Ottawa, Canada; the second son of Russian-Jewish immigrants. Originally studying chemical engineering at Queen's University in Kingston, Ontario, Greene joined the student theater company, where he acted and directed. Graduating with a Bachelor of Arts degree in foreign languages (he studied French and German) in 1937, he moved to New York City, where he worked with the Neighborhood Playhouse and studied with Sanford Meisner and at the Martha Graham dance school Returning to Canada, he became a newscaster with the Canadian Broadcasting Corporation.  He also became an in-demand narrator for films,

Lorne traveled to New York City in 1953, soon landing a series of roles in the dramatic anthology TV series, 'Philip Morris Playhouse' and 'Danger.' Those, coupled with some stage work including 'Speaking Of Murder' with Robert Mandan and Estelle Winwood, 'The Prescott Proposals' with Katherine Cornell, and 'Edwin Booth' with José Ferrer, resulted in an invitation to Hollywood, playing St. Peter in Paul Newman's film debut, 'The Silver Chalice.' He alternated film work with appearances at the Stratford (Ontario) Shakespeare Festival.

Alternating between Hollywood and New York, Greene accumulated television credits including 'Studio One,' 'Climax,' 'Alfred Hitchcock Presents,' Kraft Television Theatre, 'The Gale Storm Show,' the lead in a British series, 'Sailor Of Fortune;' and an episode of 'Wagon Train' that brought him to the attention of a producer who was beginning work on 'Bonanza.' And Greene was quickly cast as the Cartwright patriarch.

Greene's ancillary activities included TV talk and variety shows, personal appearances, and recordings. In addition to his albums with the 'Bonanza' cast, Greene cut a single called Ringo that sped to the top of 'Billboard's' pop chart before record buyers realized it wasn't about the Beatles' drummer. (Instead, and more appropriately, it was a narration, in the vein of Jimmy Dean's Big Bad John, about an outlaw and sheriff in their final showdown).

Following the cancellation of 'Bonanza,' Greene continued to star in a diverse collection of TV series: first as a private eye in 'Griff.' Then he was commander of 'Battlestar Galatica' in that 'Star Wars'-inspired show; and an arson investigator in 'Code Red.' He appeared as a guest in various dramatic series, and hosted two nature documentary series: 'Lorne Greene's Last Of The Wild' and 'Lorne Greene's New Wilderness.' He probably reached significantly more viewers, though, as TV commercial spokesman for Alpo dog food. Nevertheless, Greene was given his star on the Hollywood Walk of Fame in February, 1985.

Pernell Roberts, Jr. was born on May 18, 1928 in Waycross, Georgia. He sang in the church choir and his high school glee club, and played various horns in his school band. He was also an athlete.

Pernell entered Georgia Technological Institute with the aim of becoming an engineer, but wound up joining the Marines a year later, for a two-year hitch in the Marine Band; enrolling in the University of Maryland after mustering out.

Leaving college early – again – he appeared in several classic plays in Washington D.C. and New York City, winning a New York Drama Critics Circle Award for his off-Broadway portrayal of 'Macbeth,' and appearing with Theodore Bikel and Louis Jourdan in 'Tonight In Samarkand.'

Signed by Paramount Pictures in 1957, he appeared with Burl Ives and Sophia Loren in 'Desire Under The Elms,' and with Glenn Ford, Shirley Maclaine and Leslie Nielsen in 'The Sheepman' and Randolph Scott in Budd Boetticher's 'Ride Lonesome.' He also essayed various roles in episodic television.

Said to be frustrated with the limitations of his role and anxious for more variety, Roberts left 'Bonanza' at the end of the 1964-'65 season – thus ending the series' 'golden years,' though there were years to go.

Dan Davis Blocker was born big – fourteen pounds at birth, he said – on December 10, 1928 in DeKalb, Texas. As a teenager, he was a street-fighter; later, he attended college on football scholarships.

He broke into acting accidentally, according to legend, in a school production of 'Arsenic And Old Lace.' Acting agreed with him, and – following a season in summer stock in Boston and a hitch during the Korean War -- he eventually received his Master's in American Folk Drama from Sul-Ross State College (now University) in Alpine, Texas. He taught high school in Sonora, Texas, and Carlsbad, New Mexico before moving to Los Angeles, where he attended UCLA and worked in several TV series, most of 'em westerns, as well as films including 'Come Blow Your Horn' and 'Lady In Cement' (both starring Frank Sinatra), before coming to the attention of 'Bonanza' creator-producer David Dortort.

Blocker was a capable businessman; among his investments was the Bonanza chain of steak houses. In 1970, 'Playboy' published a short story he'd written, 'The Best Kept Secret.' During the run of 'Bonanza,' he was asked by director Robert Altman to play a key role in his version of the Raymond Chandler novel, 'The Long Goodbye.' Blocker died before filming commenced; his part was taken by Sterling Hayden.

Blocker died on May 13, 1972, of a blood clot in his lung following a gall bladder operation. Though the show had survived the loss of 'Adam,' it limped to a close without the character of 'Hoss.'

Eugene Maurice Orowitz was born on October 31, 1936 in Forest Hills, New York. His father was a publicist and theater manager. Eugene moved from the family home, then in New Jersey, to Los Angeles, where he'd won an athletic scholarship in track & field at the University of Southern California, due to his prowess as a javelin thrower, and enrolled in 1955 as a speech and drama major. He left USC after losing his scholarship following an injury, and worked at a succession of odd jobs. A friend arranged an audition at Warner Bros. Accepted by the studio's acting school, he changed his name to 'Michael Landon.'

In 1956, Landon began to amass television credits, most of them minor, in series including 'Sheriff Of Cochise,' 'Crossroads,' 'The Adventures Of Jim Bowie,' 'The 20th Century-Fox Hour,' 'Telephone Time,' and 'G. E. Theater.' His first film role of any consequence was as the title character in 'I Was A Teen-Age Werewolf,' followed by parts in 'High School Confidential' and 'God's Little Acre,' and the title character in 'The Legend Of Tom Dooley,' plus – of course – numerous television dramas, mostly westerns.

In addition to his co-starring role in 'Bonanza,' Landon wrote and/or directed several episodes. And he was the only of the three 'Cartwright' sons to stay with the show for its entire run.

Following the cancellation on 'Bonanza,' Landon became an in-demand television – though not film or stage – actor, notably producing and starring in two long-running series: 'Little House On The Prairie' (1974 -'82) and 'Highway To Heaven' (1984 -'89). He also produced the TV series 'Father Murphy,' and TV movies including 'The Jackie Robinson Story' (1970), 'The Loneliest Runner,' (1974) and 'Where Pigeons Go To Die' (1990). He was also a popular guest on television talk shows, and has a star on the Hollywood Walk of Fame.

David Canary, Lou Frizzell, Mitch Vogel and Tim Matheson joined the series as young men who hung around the Ponderosa and -- NBC hoped -- would fill the space vacated by Roberts and -- to a greater extent -- Blocker.

There followed the TV movies 'Bonanza: The Next Generation' (1988) featuring Michael Landon, Jr. and  'Bonanza -- The Return' co-starring Landon Jr. and Dirk Blocker; and a short-lived series, 2001's 'The Ponderosa,' which showed the lives of Ben, Adam, Hoss, and Little Joe in the days before the original series began.