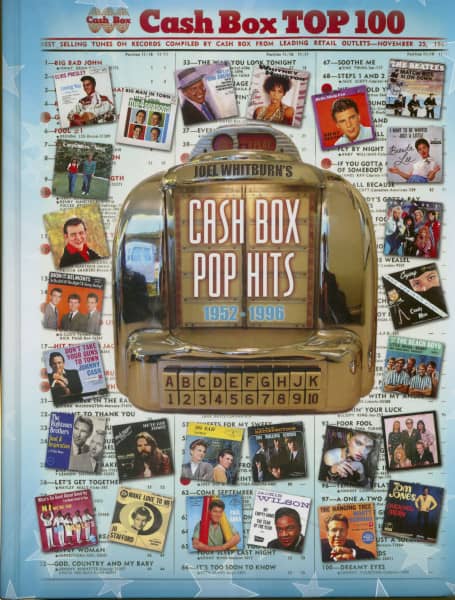 The binding is slightly damaged at two corners.>br>
Author's Note
Early one Saturday morning in late 1958, I was at a juke box dealer on the south side of Milwaukee, picking through stacks of records brought in from each serviceman's Friday route. At the price of five 45s for one dollar, I would typically bring home a stack of 25-30 records per trip. This helped satisfy my ever-increasing zeal for music and charts which was further fueled by my subscription to Billboard magazine. Upon checking out, I noticed an issue of Cash Box magazine on the juke box dealer's desk. He let me look at it and I was immediately impressed with its slick paper. On Cash Box's heavy, perforated "Top 100" pop singles chart, I saw several song titles on the chart which I knew were not on Billboard's "Hot 100" chart.

I was hooked. I wrote down the magazine's address and sent in my $15 for a year's subscription.
I have long wanted to research and document the Cash Box charts. However, one fact always kept me from proceeding: all versions of a hit song from 1952-1965 were shown together at one chart position. Here's an example from the "Top 50 Best Selling Records" chart dated August 4, 1956:

10. Stranded In The Jungle *FL-109 Jayhawks ME-70898  Gadabouts *M0-994 Cadets
Under one song title at position #10 appear versions by three different artists. The listing is in alphabetical order by label. The star indicated the bestselling versions, which in the example above belonged to the Jayhawks and the Cadets. At that time, the Cash Box "Top 50" chart was compiled from retail sales only, so sales of all three versions were added together to arrive at its chart position. This posed a problem as to how to document individual records that were grouped on the chart as one listing. I found the confidence to proceed with the Cash Box research when I hit upon the idea of the "coat-tail" asterisk; this symbol, exclusive to this book, appears next to the peak position of the versions that would have peaked further down the chart if all versions of the song had not been combined into one listing on the chart.

This is not the first book based on research of Cash Box's pop singles charts. George Albert was the president and publisher of Cash Box for four decades and in tight competition with Billboard, until his magazine's last issue on November 16, 1996. He authorized Frank Hoffmann to publish the first Cash Box research book in 1983. Pat Downey published a revised edition in 1994. Both editions researched only the Top 10 Juke Box Tunes until switching to the Top 50 Best Sellers chart on August 4, 1956.

I chose to research the Cash Box Top 50 "Nation's Best Selling Records" chart as it nearly doubled my research of the early 1950s music. My Pop Hits Singles 1940-1954 book contains the research of Billboard's pop singles chart which varied from 10-30 positions at that time. A much deeper look of that era comes with the research of the lengthier Cash Box pop singles charts. My Cash Box research commenced with the chart dated October 25, 1952, as it was the first to show a star for the top-selling version(s) of a song title. All versions with a star appear in this book. Those that did not, are not included herein. When there is more than one version with a star, the biggest hit (as determined by its listing within our Pop Hits and Top Pop Singles books) was deemed the primary hit, with all secondary versions getting an asterisk (*) next to the peak position. (There are several exceptions to this rule, such as neither version of "Young Love" by Tab Hunter or Sonny James gets an asterisk.) Cash Box's practice of combining two or more versions of a song ended with the chart dated September 18, 1965.

To ensure that the research within this all-new publication was as reliable as the research of my Billboard-based books. we examined every line of every chart. I collected each record listed in this book, in order to accurately display the titles, subtitles, artist names, label data, B-sides, and symbols.