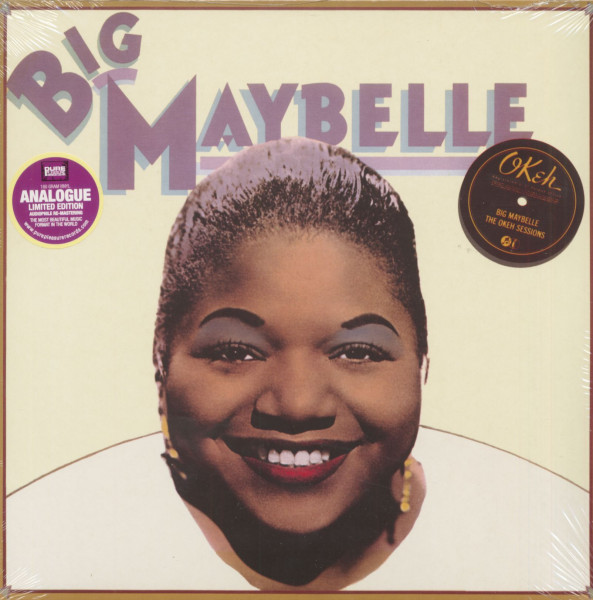 With her massive stature that matched the sheer, fervent power of her massive vocal talent, Big Maybelle was one of the first R&B chanteuses of the 50s. Her deep, hoarse voice was just as unique as the range of her recordings for Okeh and Savoy, which ranged from down-in-the-alley blues to pop-tending ballads. She performed at the Newport Jazz Festival in 1958 and acquired a large following among lovers of blues, rhythm & blues, jazz and rock'n'roll. Towards the end of her life she even covered Beatles and Donovan hits. Big Maybelle's career was hindered or shortened by severe drug addiction throughout her life, but her short life was also full of liveliness.

It's remarkable that almost half a century later the power of her Okeh sessions is still tangible. With her cheeky, courageous sound she seems like a female Howlin' wolf and it's easy to imagine that she had a big influence on the full throttle blues of Etta James, Aretha, Janis Joplin and countless others. "So Good To My Baby" is typical for the singer's microphone distorting screams as well as an appropriately flaming use of the horns. Her 1952 Okeh debut hit, "Gabbin' Blues", is a humorous dialogue between Maybelle and her gossiping rival Rose Marie McCoy, co-author of the song. One of the most moving recordings of this LP is "Ocean Of Tears", a haunting piece in minor in which Maybelle laments her deplorable condition with unforgettable cathartic fear. But ballads like "You'll Never Know", "Ain't No Use" and "You'll Be Sorry" also impress, showing a pleasing, softer side to Maybeelle's art. "Whole Lotta Shakin' Goin' On" - a song that took her to the top of the R&B hit parade before Jerry Lee Lewis turned it into a rock'n'roll anthem; her 1955 single "One Monkey Don't Stop No Show" and also "I'm Getting 'Long Alright" from 1954 were also outstanding.

New York session magicians such as tenor saxophonist Sam 'The Man' Taylor and guitarist Mickey Baker consistently provide great support. The songs on this album showcase one of the greatest blues singers ever in her prime.

Big Maybelle, born in 1926, in Jackson, Tennessee, as Mabel Smith, recorded with Christine Chatman's Orchestra in 1944 until her solo debut in 1947 on King Records. A big-voiced blues shouter, 1952 saw her as 'Big Maybelle' with Okeh, and 1953 brought three R&B Top Ten hits including `Gabbin' Blues'. She moved to Savoy in 1956 and 'Candy' became another R&B hit, but the late Fifties saw a steady output of ballads and jump-blues fail to make further com-mercial impact. The Sixties brought moves to Brunswick, Scepter, Rojac, Port and Chess, then a return to Rojac in 1966 brought success when 'Don't Pass Me By' and '96 Tears' were R&B hits, the latter giving Maybelle her only national 'pop' hit. Apart from one disc on Brunswick in 1968, she remained with Rojac until her death in January 1972.