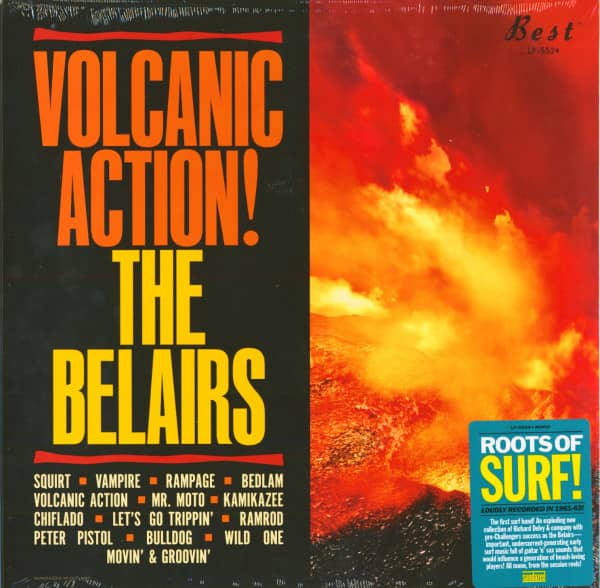 P Secure bonuspoints now
Description Review 0
Description
(Sundazed) 14 tracks 1961-1963. Limited Edition. What did you do in high school? If you were one... more
Close menu

(Sundazed) 14 tracks 1961-1963. Limited Edition.
What did you do in high school? If you were one of the five members of The Belairs, you were busy helping to invent surf music. Their 1961 regional hit, “Mr. Moto,” laid the blueprint for countless aqua odes to follow. Featuring minor key guitar leads flowing to major and back to minor, a prominent sax and dogged drums, “Mr. Moto” was a clarion call to thousands of like-minded California kids. Bands sprung up, dance halls overflowed and a steady stream of surf records began to hit the airwaves and the shop racks.
California became the epicenter for a new music genre and its hub was South Bay, Los Angeles, home of The Belairs. The Belairs’ reign was brief, from 1961-1963. An argument between guitarists Eddie Bertrand and Paul Johnson over whether to incorporate the then-new Fender reverb unit into their sound (Eddie was for it, Paul against) escalated and resulted in the group’s break-up.
Their tiny discography of three singles belied their massive impact. Bertrand formed Eddie and The Showmen, drummer Richard Delvy founded The Challengers and original Bel-Airs drummer, former Mousketeer Dick Dodd, joined The Standells, all groups destined to make national noise and carry the California sound forward.
At last, an LP collection that captures the loud legacy of this essential combo. This platter will erupt like molten lava from your speakers, spewing its magnificent mono sound all over anyone in earshot. If you can handle the heat, dig the Volcanic Action!