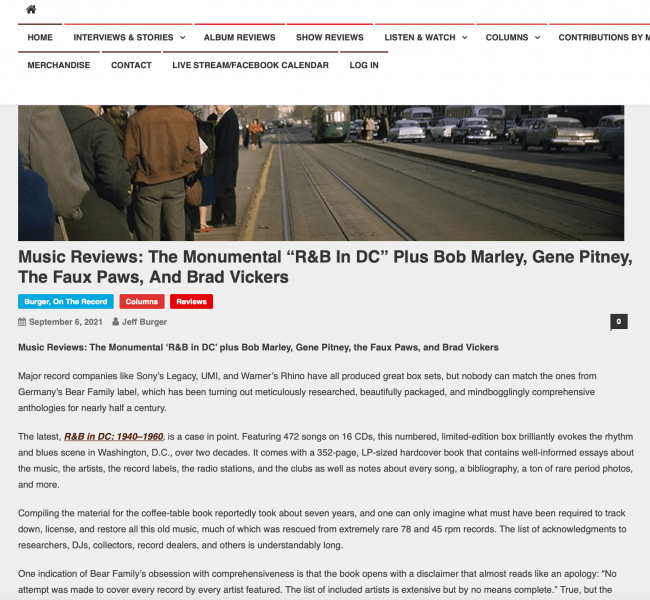 Music Reviews: ‘R&B in DC’ plus Bob Marley, Gene Pitney, the Faux Paws, and Brad Vickers
Major record companies like Sony’s Legacy, UMI, and Warner’s Rhino have all produced great box sets, but nobody can match the ones from Germany’s Bear Family label, which has been turning out meticulously researched, beautifully packaged, and mindbogglingly comprehensive anthologies for nearly half a century.

The latest, R&B in DC: 1940–1960, is a case in point. Featuring 472 songs on 16 CDs, this numbered, limited-edition box brilliantly evokes the rhythm and blues scene in Washington, D.C., over two decades. It comes with a 352-page, LP-sized hardcover book that contains well-informed essays about the music, the artists, the record labels, the radio stations, and the clubs as well as notes about every song, a bibliography, a ton of rare period photos, and more.
Compiling the material for the coffee-table book reportedly took about seven years, and one can only imagine what must have been required to track down, license, and restore all this old music, much of which was rescued from extremely rare 78 and 45 rpm records. The list of acknowledgments to researchers, DJs, collectors, record dealers, and others is understandably long.

One indication of Bear Family’s obsession with comprehensiveness is that the book opens with a disclaimer that almost reads like an apology: “No attempt was made to cover every record by every artist featured. The list of included artists is extensive but by no means complete.” True, but the compilers can probably be forgiven for any omissions since as previously noted, they did manage to fit in nearly 500 songs. The playing time exceeds 20 hours so you can literally rock around the clock with almost no repeats.

The set is not quite as narrowly focused as its moniker suggests. For one thing, the compilers considered for inclusion “any R&B-related artist or group which was from Washington, spent significant time in Washington, recorded in Washington, or had a record released on a Washington-based label.” So, for example, the box features Lloyd Price, a New Orleans native who lived for years in New York but spent some important time in Washington in the mid to late 1950s.

As for musical styles, rhythm and blues was originally a marketing term for records by Black artists and, as this box’s book explains, “it included many different styles of music which today we would not identify as R&B.” A line on the cover notes that the anthology also embraces “doo-wop, rockin’ rhythm, and more…” Jazz, swing, and Big Band styles make appearances, too, especially in the earliest tracks.

Fans of this musical era will recognize some names among the lists of performers. Marvin Gaye’s 1957 first recording with the Marquees—a vocal quartet he co-founded in Washington after he returned from the army—is here, for example. (Called “Wyatt Earp,” it was co-written by Bo Diddley.) So are songs by the Clovers, including their hit “One Mint Julep,” and several tracks by the aforementioned Lloyd Price, among them his great hit “Just Because.” The list of songwriters also embraces some luminous names, such as Harvey Fuqua, Van McCoy, Jerry Leiber, Mike Stoller, Bob Crewe, Fats Domino, Dave Bartholomew, and Fats Waller. In addition, there are tracks by written Ahmet Ertegun, Atlantic Records’ late co-founder (credited here with his sometime-pseudonym Nugetre—his last name spelled backward).
But the compilers of this box were clearly less interested in featuring hits and big names than in shining a light on acts and recordings that deserve much more attention than they’ve received. Some of the set’s greatest pleasures involve terrific artists who have been out of the public eye for decades—or who, for various reasons, never attracted much of a following in the first place. You almost certainly don’t remember such outfits as the Syncopators, TNT Tribble Orchestra, Phil Flowers, the Rainbows, or Frank Motley, but you won’t likely forget them after spending time with their recordings in this collection.