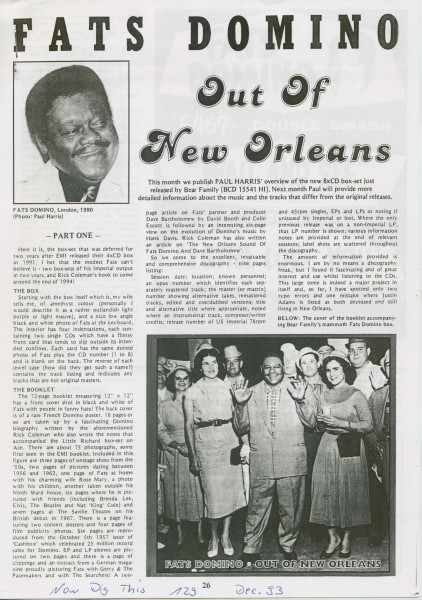 FATS DOMINO, London, 1990 (Photo: Paul Harris)
PART ONE -
Here it is, the box-set that was deferred for two years after EMI released their 4xCD box in 1991. I bet that the modest Fats can't believe it - two box-sets of his Imperial output in two years, and Rick Coleman's book to come around the end of 1994!

THE BOX Starting with the box itself which is, my wife tells me, of amethyst colour (personally I v,ould describe it as a rather outlandish light purple or light mauve), and a nice low angle black and white photo of Fats at the keyboard. The interior has four indentations, each con-taining two single CDs which have a flimsy front card that tends to slip outside its inten-ded confines. Each card has the same dotted photo of Fats plus the CD number (1 to 8) and is blank on the back. The reverse of each jewel case (how did they get such a name?) contains the track listing and indicates any tracks that are not original masters. THE BOOKLET The 72-page booklet measuring 12" x 12" has a front cover shot in black and white of Fats with people in funny hats!

The back cover is of a rare French Domino poster. 18 pages or so are taken up by a fascinating Domino biography written by the aforementioned Rick Coleman who also wrote the notes that accompanied the Little Richard box-set on Ace. There are about 75 photographs, some first seen in the EMI booklet. Included in this figure are three pages of onstage shots from the '50s, two pages of pictures dating between 1956 and 1962, one page of Fats at home with his charming wife Rose Mary, a photo with his children, another taken outside his Ninth Ward house, six pages where he is pic-tured with friends (including Brenda Lee, Elvis, The Beatles and Nat 'King' Cole) and seven pages at The Saville Theatre on his British debut in 1967. There is a page fea-turing two concert posters and four pages of film publicity photos. Six pages are repro-duced from the October 5th 1957 issue of 'Cashbox' which celebrated 25 million record sales for Domino. EP and LP sleeves are pic-tured on two pages and there is a page of clippings and an extract from a German maga-zine proudly picturing Fats with Gerry & The Pacemakers and with The Searchers!

A two-page article on Fats' partner and producer Dave Bartholomew by David Booth and Colin Escott is followed by an interesting six-page view on the evolution of Domino's music by Hank Davis. Rick Coleman has also written an article on 'The New Orleans Sound Of Fats Domino And Dave Bartholomew'. So we come to the excellent, invaluable and comprehensive discography - nine pages listing: Session date; location; known personnel; an opus number which identifies each sep-arately mastered track; the master (or matrix) number showing alternative takes, remastered tracks, edited and overdubbed versions; title and alternative title where appropriate, noted where an instrumental track; composer/writer credits; release number of US Imperial 78rpm and 45rpm singles, EPs and LPs or noting if unissued by Imperial or lost.

Where the only previous release was on a non-Imperial LP, that LP number is shown; various information notes are provided at the end of relevant sessions; label shots are scattered throughout the discography. The amount of information provided is enormous. I am by no means a discography freak, but I found it fascinating and of great interest and use whilst listening to the CDs. This large tome is indeed a major project in itself and, so far, I have spotted only two typo errors and one mistake where Justin Adams is listed as both deceased and still living in Nev, Orleans.
BELOW: The cover of the booklet accompany-ing Bear Family's mammoth Fats Domino box.