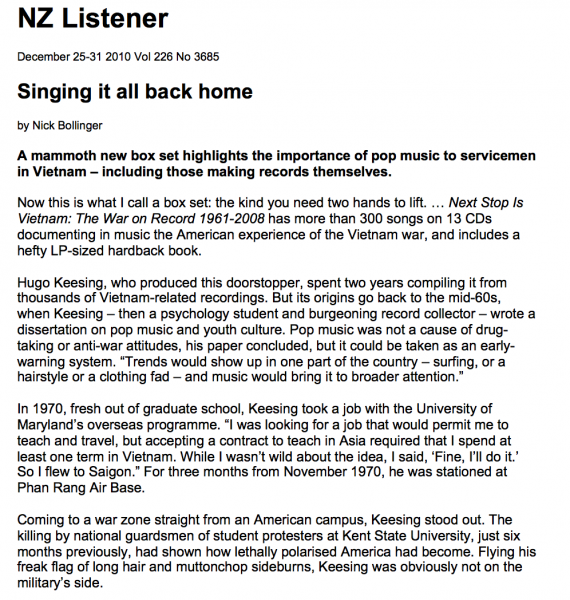 Singing it all back home

A mammoth new box set highlights the importance of pop music to servicemen in Vietnam – including those making records themselves.

Now this is what I call a box set: the kind you need two hands to lift. … Next Stop Is Vietnam: The War on Record 1961-2008 has more than 300 songs on 13 CDs documenting in music the American experience of the Vietnam war, and includes a hefty LP-sized hardback book.

Hugo Keesing, who produced this doorstopper, spent two years compiling it from thousands of Vietnam-related recordings. But its origins go back to the mid-60s, when Keesing – then a psychology student and burgeoning record collector – wrote a dissertation on pop music and youth culture. Pop music was not a cause of drug-taking or anti-war attitudes, his paper concluded, but it could be taken as an early-warning system. “Trends would show up in one part of the country – surfing, or a hairstyle or a clothing fad – and music would bring it to broader attention.”

In 1970, fresh out of graduate school, Keesing took a job with the University of Maryland’s overseas programme. “I was looking for a job that would permit me to teach and travel, but accepting a contract to teach in Asia required that I spend at least one term in Vietnam. While I wasn’t wild about the idea, I said, ‘Fine, I’ll do it.’ So I flew to Saigon.” For three months from November 1970, he was stationed at Phan Rang Air Base.

Coming to a war zone straight from an American campus, Keesing stood out. The killing by national guardsmen of student protesters at Kent State University, just six months previously, had shown how lethally polarised America had become. Flying his freak flag of long hair and mutton­chop sideburns, Keesing was obviously not on the military’s side.

“I had long hair and purposely did not get a military-style haircut before I went to Vietnam. I vividly remember the first night, coming out of the officers’ mess after my first meal, and being confronted by a gentleman who smelled of alcohol. He was a pilot, I guessed, and he took exception to the way I looked. He said, ‘What the hell do you think you’re doing here?’ I said politely I was just having dinner, and his next question was ‘What’s that shit on your face?’ I said, ‘That’s hair.’ I probably wasn’t taking him seriously enough and it didn’t take very long for a circle of people to form around us.

“But what could have turned into an unfortunate situation was broken up when the base commander and wing commander came breaking through this circle of men who were surrounding me and said, ‘What’s going on here?’ I said, ‘Nothing as far as I’m concerned’, and quickly left.”

The next day Keesing was called in front of his superiors, who strongly suggested he see a barber. “Word got around and at my class the next day the first thing I heard was, ‘Don’t do it, don’t cut your hair!’ Most of my students were enlisted, and I was picking up very quickly on a different attitude if I compared the enlisted – who included a large number of draftees – and the officers.”

Keesing kept his hair, but stayed away from the officers’ bar.

Over the following months, he observed first-hand the importance of music to officers and draftees alike. They brought with them records and cassettes, tuned in to broadcasts over Armed Forces Radio, and listened to covers bands from the Philippines and Korea. Certain songs became the soundtrack to the war.

The Animals’ hit We Gotta Get Out of This Place – although actually written about escaping urban poverty rather than a war zone – was ubiquitous. “It was the one that seemed to capture what everyone had on his mind. If a band came to Phan Rang, that would be the song

that would be requested most often. If the Filipino band talked gibberish for the verses but got the chorus right, they were fine.”

Naturally, We Gotta Get Out of This Place features in the box set, although not the Animals’ version. It was one of a handful of songs Bear Family (the German reissue label that commissioned the set) was unable to obtain licences for. But the set includes dozens of emblematic recordings, representing a range of positions: Buffy Sainte-Marie’s The Universal Soldier back to back with Jan Berry’s The Universal Coward; Merle Haggard’s staunchly redneck The Fightin’ Side of Me and the Fugs’ fiercely ironic Kill for Peace, not to mention such anthems as John Lennon’s Give Peace a Chance and Bob Dylan’s ­Masters of War.

Some of the most revealing material was written and recorded by service­men. The best known of these is undoubtedly Staff Sergeant Barry Sadler, a member of the elite Special Forces who first recorded his Ballad of the Green Berets in Saigon in 1964. A year later, in Fort Bragg recuperating from injuries, he reworked the song and recorded the ­version that became the pop hit of 1966.

But there is a world of difference between Sadler’s propagandist paean and the black humour of the High-Priced Help, a quartet of helicopter pilots recorded “in-country” at an officers’ club, or Dolf Droge, who served with the US Information Agency in Saigon and performs the fiercely ironic Southeast Asia’s Disneyland.

Keesing notes that Vietnam was not the first war in which topical material was written and performed by its ­participants. “But the idea that they would be recorded was new. I don’t think there were many tape recorders around in Korea, and they had hardly been invented in World War II. What made Vietnam different was the fact that the technology was available. Every base I was on had a hobby shop that had tape recorders, so when there was an occasion such as commander’s calls or special even­ings someone thought about bringing a tape recorder and capturing it.”

And in Afghanistan and Iraq today? “Again, the technology has changed so much. There is much more communication via the internet, so the need to write songs to get the message back home is not so necessary. You just go online. It’s almost as if writing and recording a song would take too long.”

… NEXT STOP IS VIETNAM: THE WAR ON RECORD 1961-2008 (Bear Family); a series of four programmes based around the box set and compiled by Nick ­Bollinger will be broadcast on Radio New Zealand National from January 2.