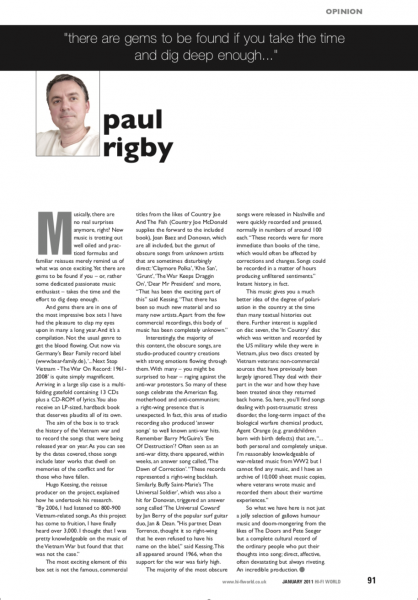 Paul Rigby
Musically, there are
no real surprises anymore, right? New music is trotting out well oiled and prac- ticed formulas and familiar reissues merely remind us of what was once exciting.Yet there are gems to be found if you – or, rather some dedicated passionate music enthusiast – takes the time and the effort to dig deep enough.

And gems there are in one of the most impressive box sets I have had the pleasure to clap my eyes upon in many a long year.And it’s a compilation. Not the usual genre to get the blood flowing. Out now via Germany’s Bear Family record label (www.bear-family.de),‘...Next Stop Vietnam - The War On Record: 1961- 2008’ is quite simply magnificent. Arriving in a large slip case is a multi- folding gatefold containing 13 CDs plus a CD-ROM of lyrics.You also receive an LP-sized, hardback book that deserves plaudits all of its own.
The aim of the box is to track the history of the Vietnam war and to record the songs that were being released year on year.As you can see by the dates covered, those songs include later works that dwell on memories of the conflict and for those who have fallen.
Hugo Keesing, the reissue producer on the project, explained how he undertook his research.

“By 2006, I had listened to 800-900 Vietnam-related songs.As this project has come to fruition, I have finally heard over 3,000. I thought that I was pretty knowledgeable on the music of the Vietnam War but found that that was not the case.”
The most exciting element of this box set is not the famous, commercial titles from the likes of Country Joe And The Fish (Country Joe McDonald supplies the forward to the included book), Joan Baez and Donovan, which are all included, but the gamut of obscure songs from unknown artists that are sometimes disturbingly direct:‘Claymore Polka’,‘Khe San’, ‘Grunt’, ‘The War Keeps Draggin On’, ‘Dear Mr President’ and more, “That has been the exciting part of this” said Kessing, “That there has been so much new material and so many new artists. Apart from the few commercial recordings, this body of music has been completely unknown.”

Interestingly, the majority of this content, the obscure songs, are studio-produced country creations with strong emotions flowing through them.With many – you might be surprised to hear – raging against the anti-war protestors. So many of these songs celebrate the American flag, motherhood and anti-communism; a right-wing presence that is unexpected. In fact, this area of studio recording also produced ‘answer songs’ to well known anti-war hits. Remember Barry McGuire’s ‘Eve Of Destruction’? Often seen as an anti-war ditty, there appeared, within weeks, an answer song called, ‘The Dawn of Correction’. “These records represented a right-wing backlash. Similarly, Buffy Saint-Marie’s ‘The Universal Soldier’, which was also a hit for Donovan, triggered an answer song called ‘The Universal Coward’ by Jan Berry of the popular surf guitar duo, Jan & Dean. "His partner, Dean Torrence, thought it so right-wing that he even refused to have his name on the label,” said Kessing.This all appeared around 1966, when the support for the war was fairly high.

The majority of the most obscure songs were released in Nashville and were quickly recorded and pressed, normally in numbers of around 100 each. “These records were far more immediate than books of the time, which would often be affected by corrections and changes. Songs could be recorded in a matter of hours producing unfiltered sentiments.” Instant history, in fact.

This music gives you a much better idea of the degree of polari- sation in the country at the time than many textual histories out there. Further interest is supplied on disc seven, the ‘In Country’ disc which was written and recorded by the US military while they were in Vietnam, plus two discs created by Vietnam veterans: non-commercial sources that have previously been largely ignored. They deal with their part in the war and how they have been treated since they returned back home. So, here, you’ll find songs dealing with post-traumatic stress disorder, the long-term impact of the biological warfare chemical product, Agent Orange (e.g. grandchildren born with birth defects) that are, “... both personal and completely unique. I’m reasonably knowledgeable of war-related music from WW2 but I cannot find any music, and I have an archive of 10,000 sheet music copies, where veterans wrote music and recorded them about their wartime experiences.”

So what we have here is not just a jolly selection of gallows humour music and doom-mongering from the likes of The Doors and Pete Seeger but a complete cultural record of the ordinary people who put their thoughts into song; direct, affective, often devastating but always riveting. An incredible production.