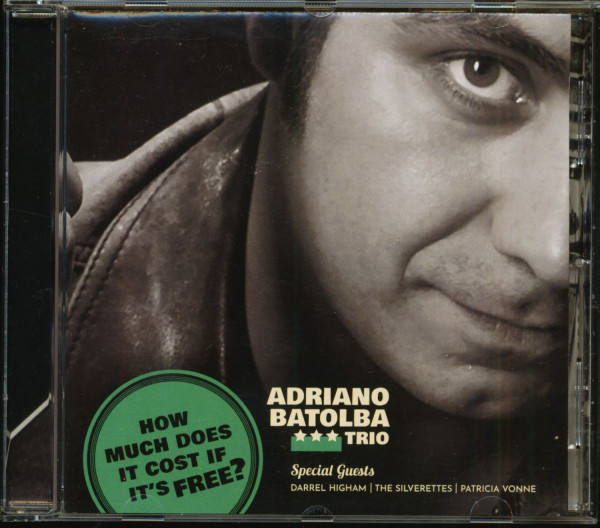 P Secure bonuspoints now
Description Review 0
Description
(ToBaGo Records) 14 Tracks -  There ain't nobody else like him a second time in... more
Close menu

Adriano Batolba Trio: How Much Does It Cost If It's Free? (CD)

There ain't nobody else like him a second time in Germany: Adriano Batolba, guitarist, singer and composer, is not only considered an exceptional talent in Germany when it comes to Rockabilly and Rock'n'Roll. As initiator, six-string serker, musical director and producer of Dick Brave & The Backbeats he was hailing prizes, gold and platinum.
With his Adriano Batolba Orchestra, launched in 2009, he released the albums "Live'n'Loud" (2013) and "Thirteen Renegades" (2016) on his own label ToBaGo Records. For his current project Adriano Batolba Trio he tests a new variant on "How Much Does It Cost, If It's Free?": Concentrated on voice, Gretsch guitar, double bass and drums, experiences and developments of the past years are reduced to the essentials. In the team with Falko Burkert on double bass, who already proved himself in Dick Brave And The Backbeats, and Bernie Weichinger on drums, a buddy with whom Batolba rocked in the clubs of Amsterdam during his studies, a powerful triumvirate came together.
More than six decades after Blues, Jazz, Hillbilly, Boogie Woogie, Jump Blues, Rhythm'n'Blues, Doo Wop, Gospel, Country and Western Swing developed into Rock'n'Roll in the USA, the Adriano Batolba Trio demonstrates how timelessly fresh this genre can still sound.
"Hot Rock'n'Roll, with short stylistic excursions into Doo Wop, Western Swing, Rockabilly, Gospel, Boogie Woogie or Latin. The musical guests like the Texan guitarist Patricia Vonne, the British Rockabilly star Darrel Higham or the gospel trio The Silverettes also fit perfectly." (Good Times, August-September 2019)

Article properties: Adriano Batolba Trio: How Much Does It Cost If It's Free? (CD)