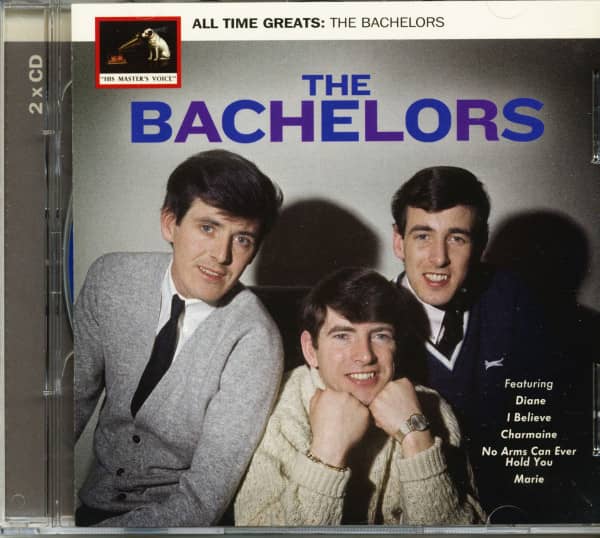 The Bachelors: All Time Greats (2-CD)

Learn more about The Bachelors
The Bachelors Amention of the Harmonichords will result in many blank expressions but once... more
Close menu
"The Bachelors"

Amention of the Harmonichords will result in many blank expressions but once people realise they are better known as the Bachelors a smile will spread across their face as they fondly remember such hits as 'I Believe', 'The Sound Of Silence' and 'Diane'.
Originally formed in Dublin in the 1950s as a harmonica trio -comprising John Stokes (born Sean Stokes, 13 August 1940) and brothers Con (18 November 1941) and Declan Cluskey (12 December 1942) the Harmonichords built upon their quickly expanding reputation when they first toured Britain in 1959. Signed to Decca, the label which had turned down the Beatles in favour of Brian Poole and the Tremeloes, it soon became apparent that it was the boys' voices that would catch the public's attention rather than their instrumental skills and they were soon revamping old favourites drenched in their own inimitable harmonies.

After pushing for a breakthrough for two years, their chart debut came in January 1963 when `Charmaine' (produced by Shel Talmy, who as an independent received a royalty on every record sold until the group's management objected) catapulted them to the UK Number 6 spot and nationwide stardom. Having been a transatlantic hit for Mantovani in 1951, the 1927 Lew Pollack and Erno Rapee-penned tune would establish a pattern that would bring the Bachelors a string of successes. With 'Faraway Places' only grazing the lower reaches of the UK Top 40 though, a much-needed return to form followed as `Whispering' returned them to the Top 20 in August.

But, it would be the release of 'Diane' - another Pollack/Rapee track which had featured in the 1927 film Seventh Heaven and hit the highs of US Number 2 for the Nat Shilkret Orchestra a year later - that would give the Bachelors their one and only chart-topper. Sandwiched between the dominant Mersey sounds of the Searchers and Cilla Black at the peak of the UK chart, and with the Beatles between releases, 'Diane' spent one week in pole position. This feat rewarded the Bachelors with the honour of being the first Irish group to hit Number 1 since Ruby Murray in 1955 and the last before the Boomtown Rats took 'Rat Trap' to the top in 1978. The song also opened their Stateside account with a Top 10 debut.

The follow-up was a remake of Frankie Laine s 1953 chart-topping 'I Believe' but, unfortunately for the Dublin youngsters, the Searchers' `Don't Throw Your Love Away' prevented a second Number 1. Written by Irvin Graham, Jimmy Shirl, Al Stillman and Ervin Drake, 'I Believe' has been covered by the likes of David Whitfield and Mahalia Jackson, but it wouldn't return to the top of the UK charts until 1995 when released by Soldier Soldier crooners Robson and Jerome.

Two UK Number 4s in 'Ramona' (a 1928 hit for Gene Austin) and 'I Wouldn't Trade You For The World' cemented their chart residency throughout the summer before ending the year with a Royal Variety Performance as `No Arms Can Ever Hold You', a US Top 40 hit for Pat Boone in 1955, hit UK Number 7 but stalled at 27 in America. Indeed, 1964 would prove the Bachelors' biggest year as they hit Number 2 in the UK album chart with The Bachelors And 16 Great Songs'.

After 'True Love Forever More' failed to set the chart alight, peaking at UK Number 34, a return to the 1920s brought more successful results. Irving Berlin had composed 'Marie' in 1928, but it was the Bachelors who registered a transatlantic Top 15 hit in 1965 as they staked their claim to the title of MOR kings of the beat era. Following a somewhat disappointing (UK 27/US 32) chart showing with 'In The Chapel In The Moonlight', the Bachelors returned to the UK Top 3 in April 1966 for the last time with their version of American superstars Simon and Garfunkel's US chart-topper, 'The Sounds Of Silence'. Written in 1963 by Paul Simon, the song's chart position
proved impossible to repeat and - despite a US Top 40 hit with 'Love Me With All Of Your Heart in May 1966 - the Bachelors signed off their account with four UK Top 30 entries over the next 12 months including 'Walk With Faith In You Heart' and 'Marta'. Their UK album
sales continued strong, however, and two volumes of 'World Of The Bachelors' would give them a Number 8 and 11 in the summer of
1969.

With their clean cut image and natural ability in front of the cameras which had made them popular with both television producers and
viewers alike, the Bachelors had ruled supreme in the face of the musical revolution exploding from Merseyside. And, despite an
unfamiliar line-up, the name was still going strong as the century drew to a close. Now you can relax, pour yourself a whiskey and enjoy these 11 original hit versions presented here alongside more than half a dozen 6 bonus 1990s recordings of such standards as 'Danny Boy' and 'Rose Of Tralee' as well as the Hollies' classic 'He Ain't Heavy, He's My Brother' (a UK Number 1 in 1969 and on reissue in 1988). They may no longer be on top of the charts, but with music as melodic as this collection offers, you will soon be feeling on top of the world.
Michael Heatley, 1997 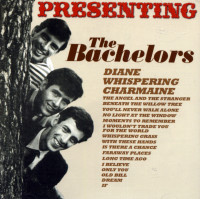 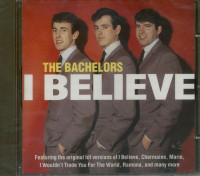 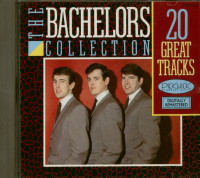