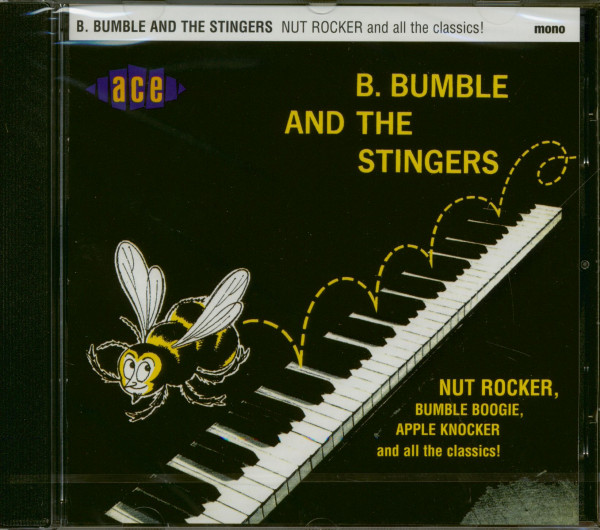 B. Bumble & The Stingers: Nut Rocker & All Their Classics! (CD)

(Ace Records) 24 tracks 1961-63 (4 unissued).
-
Classic rock'n'roll massacre of the classics by Mr Bumble and friends with the cream of the west coast session crop, and a young Kim Fowley warming up for a career in the unusual.

The story behind B. Bumble & The Stingers is long, complicated and messy begins Stuart Colman's sleevenotes for this album. Undeterred, Stuart goes on to unravel the mystery of the band (the details of which are far too involved to reiterate here - you'll just have to read them when you buy the album). Suffice to say, this was the novelty band master-minded by the legendary Kim Fowley and Nut Rocker assembles all the band's classics. Taken from the vaults of the Rendezvous label, this CD (the first ever B. Bumble CD) contains the UK No 1 hit Nut Rocker, such American chart hits as Bumble Boogie and Boogie Woogie, plus three previously unreleased tracks - Nola, All Of Me and Bumble Bossa Nova - and a previously unreleased alternate take Canadian Sunset.Classic rock will never be quite as wild as the music of B. Bumble - check out Mashed No 5, which leaps off from the fiirst movement of Beethoven's Symphony No 5 or Baby Mash (from Brahms' Lullaby). You've just got to admire someone who can turn Bizet's L'Amour Est Un Oiseau Rebelle from Carmen into Chicken Chow Mein!

Article properties: B. Bumble & The Stingers: Nut Rocker & All Their Classics! (CD)