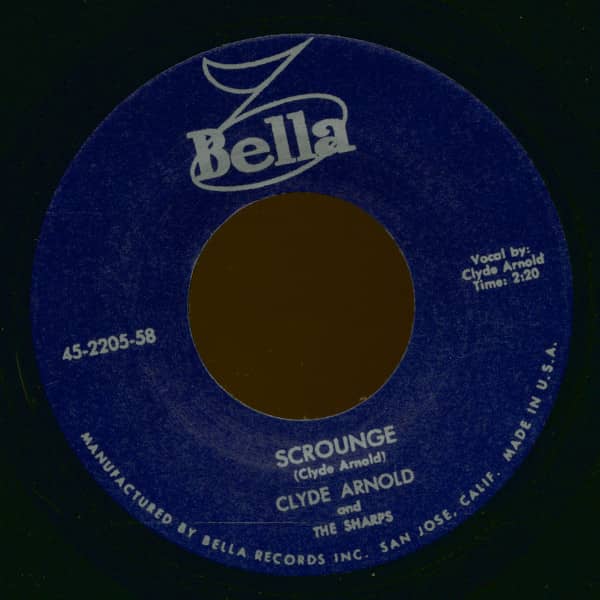 Clyde Arnold And The Sharps: Scrounge - I've Got A Baby (7inch, 45rpm)

Reproduction of this 1958 Bella Beauty - Clyde Arnold is a Gunslinger

Clyde Arnold was originally from Austin, Texas, and he had quite a career in country music on his shoulders when he moved to Oakland, CA. After he had graduated from Austin high school, he formed the four-piece country band The Rovettes in Dallas, TX, together with Larry McGill, an Austin native country musician and Clyde's buddy, for playing shows in the Austin area. The band came to the attention of Bill Callahan when they performed on the 'Country Picnic' show in Fort Worth, TX. Bill Callahan, a former country music star, was an artist manager at the time and put the band under contract. He booked them for the Grand Ole Opry road company and Arnold and his band toured extensively under the Opry banner, sharing stages from coast to coast with The Everly Brothers, Jimmy C. Newman, and Kitty Wells. This led to a recording contract with Delta Records and after a few releases, the band found themselves performing on such popular shows as 'The Big D Jamboree,' 'The Cowtown Hoedown,' and the 'Mississippi Jubilee.'