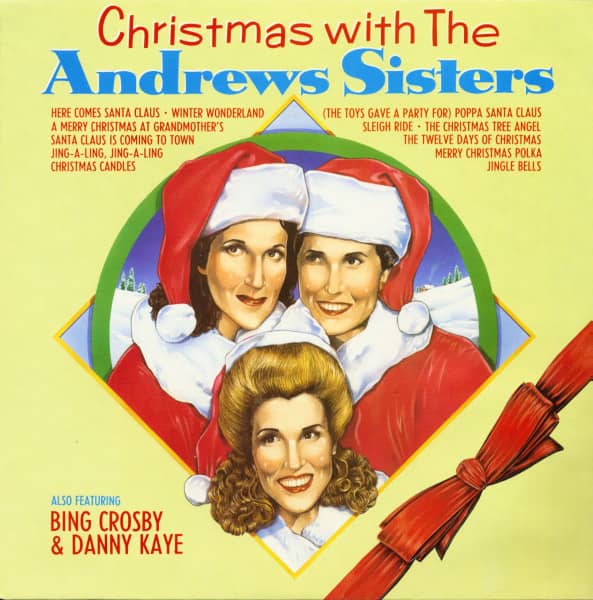 This article is deleted and can no longer be ordered!
P Secure bonuspoints now
Description
Learn more about The Andrews Sisters
Review 0
Description
(Pickwick International) 12 Tracks -  With a little help from their friends, the three... more
Close menu

With a little help from their friends, the three girls from Minneapolis -Patti, Maxine and Laverne, - are back with a great set of Yuletide favourites. Recorded at their height of fame, the Andrews Sisters got together with Bing Crosby and Danny Kaye on evergreen Christmas standards like "Jingle Bells", "A Merry Christmas At Grandmother's", "The Twelve Days of Christmas" and "Jingle Bells". They also perform on their own, wonderful seasonal classics like "Winter Wonderland", "Sleigh Ride" and "Christmas Candles".

Twelve fabulous sing-a-long favourites that sold their first million as long ago as 1937! Since then the Andrews Sisters have been awarded five more gold discs becoming International Superstars of their time throughout the 1940's. In 1953, Patti left the group to perform solo, but it is the recordings of the '30's and 40's that the millions of fans remember most fondly. To date, The Andrews Sisters have sold a staggering sixty million records! They were responsible for starting off the calypso craze of the 1940's, and for establishing the 'Boogie Woogie', which Clarence 'Pinetop' Smith began exploring in the twenties - and which he never saw develop into a national craze as he was killed in 1929 before Boogie Woogie really took off.

As Christmas draws near, this is a collection of timeless pieces of nostalgia which are use to get your feet going, and a must for any party over the holidays. Several of the numbers we have featured in this great new release have been million sellers in their own right, or have 'taken part' in producing a 'Gold' album. In 1943, The Andrews Sisters with Bing Crosby recorded "Jingle Bells", which was written in the 1850's by J. S. Pierpont, and was originally called "The One-Horse Open Sleigh". Sales of "Jingle Bells" were estimated at over six million records for The Andrews Sisters and Bing's version alone!. A little history lesson here - the composer of "Jingle Bells" wrote it for a local Sunday School entertainment, but could never have foreseen its ultimate, incredible success! This recording was made in Los Angeles on the 27th September 1943. The Andrews Sisters also achieved a million seller with "Winter Wonderland" in 1946.

The collective sales of this particular evergreen are now over 40 million! Written in 1934 by Dick Smith and Felix Bernard, "Winter Wonderland" has been covered by numerous artists ranging from Johnny Mathis to Phil Spector. In 1947, one Gene Autry wrote and recorded a great number, "Here Come Santa Claus". It became an instant hit and a worldwide million seller.

Born in 1907, Autry began recording in 1930, and also appeared in the film 'In Old Santa Fe' in 1934. This led to many box-office hit 'Westerns', and in 1936 he was voted Top Western Star, an accolade he also held from 1946 to 1954. Autry also scored a further two million sellers with Christmas songs - in 1949 with "Rudolph The Red-Nosed Reindeer", and 1950 with "Frosty The Snowman". Also in 1947, "Santa Claus Is Coming To Town" played a significant part in contributing to the success of Bing Crosby's million selling album "Merry Christmas". The track became one of the highlights of the set and is included here, featuring as it does the great Andrews Sisters!

The Andrews Sisters, who were of Norwegian-Greek descent, were born in Minneapolis, in the state of Minnesota. In their youth, Patti had been a tap-dancing champion, and LaVerne had seriously considered a career as a concert pianist, but it was Maxene who saw the possibili-ties of the three of them singing together, for their harmonizing together at school events had been very well received. So when bandleader Larry Rich, having seen them perform at a Kiddie Revue, offered them a job, they immediately grabbed it. Patti was 12, Maxene 14, and LaVerne 17, when they began with Rich on what turned out to be a tour of vaudeville theaters that covered the whole of the United States. However, the arrival of talking pictures proved to be the death-knell for vaude-ville, but somehow the sisters managed to get through two years of touring on their own. It was a long hard slog, with many disappointments along the way, but they never gave up hope at any time and kept knocking on the doors of agents, directors and producers, in spite of there being a deep economic depression in full spate.

They sang in hotels with Leon Belasco's orchestra (with whom they made their very first recording), before moving into the club and theater circuit, and it wasn't long before radio offers came their way, which led to recordings being made, which in turn led to their being more in demand than ever. Thereafter, their life became a busy succession of radio, night club and theater engagements. Then motion pictures made a claim on them, and over an eight-year period they appeared in well over a dozen movies, including an appearance in one of the most popular of all the Bob Hope-Bing Crosby-Dorothy Lamour Road' films, "Road to Rio". Meanwhile their recordings produced one big hit after another. They are probably the most famous sisters-act the world of show-business and popular entertainment has ever known, for only the four King Sisters spring to mind as having been anyt-hing remotely similar, and the Dolly Sisters were from a totally different era entirely. Patti, Maxene and LaVerne Andrews together made an extraordinarily successful singing trio, and their time' could best be said to have dated from 1937, the year when their huge hit "Bei Mir Bist Do Schoen" had propelled them into instant popularity. The song made them, and they made the song.

Their particular brand of showmanship was considered somewhat brash at the time, but which was nevertheless highly effective on novelty or jazzy' numbers. They certainly sang well in harmony, and achieved a particularly tasteful blend on ballads. Patti, the blonde one, sang lead and solo, and with her very agreeable personality also acted as spokesperson for the trio. The Second World War found them probably at the height of their fame, and apart from their own big wartime hits such as, for example, "Rum and Coca Cola", "Boogie Woogie Bugle Boy" and "Don't Sit Under The Apple Tree", they also combined with the Old Groaner hinself, Bing Crosby, on other mission-sellter such as "Pistol Packin' Momma and "Don't Fence Me In" 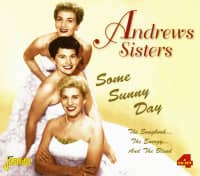 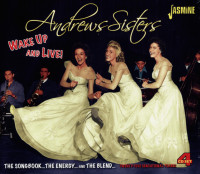 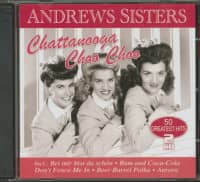