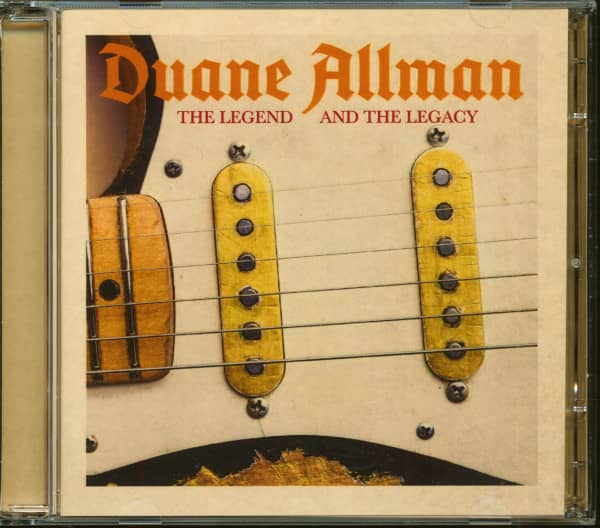 Duane Allman: The Legend And The Legacy (2-CD)

Article properties: Duane Allman: The Legend And The Legacy (2-CD)

Duane Allman (November 20, 1946 – October 29, 1971) was one of the defining musicians of the 60s and early 70s, rated second only to Jimi Hendrix in Rolling Stone’s list of 100 greatest guitarists. A founding member, with his brother Gregg, of the Allman Brothers Band, Duane was also active as a session musician, and as a member of the all-star group Derek & the Dominos.

The acclaimed 2013 CD box set, Skydog: The Duane Allman Retrospective, was a critical and commercialsuccess, chronicling the full breadth and depth of Allman’s music. This new, highly collectible edition will be a limited run of 1000. Each individually-numbered box set includes 14 LPs, pressed on audiophile-quality, 180-gram vinyl, plus a 56-page book and features rare and new, never-before seen photos, with essays by journalist Scott Schinder and Duane’s daughter, Galadrielle.

Produced by Galadrielle Allman and esteemed reissue producer Bill Levenson, Skydog features all 129 tracks from the original CD edition of the retrospective, including many classic Allman Brothers songs, plus a collector’s cache of rare singles and long out-of-print album tracks. The songs range from Duane’s early recordings (with Gregg) in bands such as The Escorts, Allman Joys and Hour Glass; to his studio work with Aretha Franklin, Wilson Pickett, Boz Scaggs and Delaney & Bonnie; to a live jam session with the Grateful Dead.