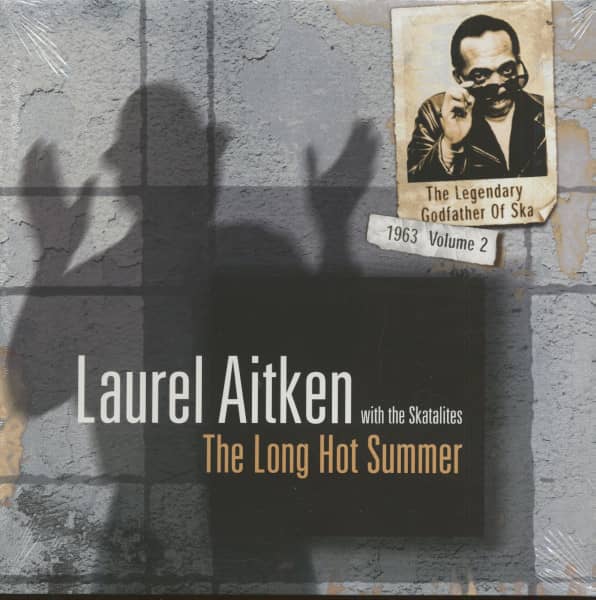 (Grover Records) 15 tracks - The early recordings of Laurel Aitken - Jamaican Rhythm And Blues and early Ska at its best
Laurel Aitken is undisputedly one of Jamaica's 'Folk Heroes'. His immense creativity for the development of the original, typical music of the Island, i.e. Ska and Reggae, and its spreading in England and Europe is reflected in countless singles and albums that led to big hits within and outside of the dedicated scenes. The now 75 year old performer's life achievement brought him fame as both 'Godfather Of Ska' and 'High Priest Of Reggae'. While the first volume of this series (GRO-CD /LP 022 Laurel Aitken: The Pama Years) focused mainly on the Reggae-side of the singer, songwriter and producer, The Long Hot Summer proves his well earned title as 'Ska-Padrino'.
In 1963, Laurel Aitken (who had been living in the UK for some three years) decided to pay a month's visit to Jamaica, the place where he started it all. He got in touch with a friend of his, bass player Lloyd Brevette from the Skatalites, and a little later, they had fixed a studio session with the entire band comprising all the top notch musicians such as Tommy McCook, Lloyd Knibbs, Gladstone Anderson, Roland Alphonso and the rest. The recording took place at Ken Khouri's Federal Studio, the spot were nearly all of Leslie Kong's »Beverly's«- sessions with the Skatlites were held at that time. It took them only two days to lay down more than a dozen brand new songs, including mix-down! But the most remarkable thing was that the Godfather, against the common policy of these days, paid for everything himself and even bought the master tapes, in order that nobody was tempted to cut bootlegs out of his original material.
Back in London, Laurel cut a whole lot of acetates and gave them to the biggest sound systems in different areas. Needless to say that the crowd immediatly started raving about this wonderful music, so the next step was to go and press the proper records. Most of these singles were released on Rickard's RIO label, some of them on Chris Blackwell's infamous Island and Black Swan labels.
Out of the long, hot summer of 1963 emerged these both musically and historically valuable recordings. Laurel Aitken and the Skatalites -musicians and performers who were and are to date the tops of their league - joined forces to secure his after hit. If you are talking about Ska music, then this is it.
In addition to the collection that was released in the early nineties, this re-release contains three bonus tracks that could only be found on ultra rare singles so far. Special thanks go out to Christian Eritt a.k.a. 'DJ Power Version' who provided the 7"s for the songs 'In My Soul', 'One More River To Cross' and 'Remember My Darling' and some extra information at any time. Dr. Ring-Ding, September 1998