When Eden Ahbez died at the age of eighty-six in 1995, he was, from the view of pop culture history that revolves around movements, the forefather of psychedelic music and the first West Coast hippie.

Labels as such seem to reduce the individual to a series of descriptors intended to measure him against standards of the form, which is problematic itself on a number of levels. Yet the lingering question surrounding Ahbez and his legacy seems to remain: just how closely does he presage psychedelic icons like Jimi Hendrix, the Grateful Dead, John Lennon, and Pink Floyd?

For starters, his catalog is comparatively small: a few rare albums and a smattering of even scarcer 45s and 78s. The autobiographical Nature Boy is easily Ahbez's best-known song; Nat 'King' Cole had the first hit with it, in 1948, though by today's count there are well over 3500 documented versions (including last year's duet by Tony Bennett and Lady Gaga).

The other established Ahbez work is his lone solo album, 'Eden's Island.' First released on Del-Fi Records in 1960, it sold less than 500 copies. During the tiki revival of the 1990s, however, 'Eden's Island' was rediscovered and became a cult item. It has since enjoyed a growing reputation as one of the earliest psychedelic concept albums.

This new LP is mostly comprised of songs that fall somewhere between Nature Boy and 'Eden's Island,' and show Ahbez both struggling to replicate the success of his inaugural hit and slowly transforming himself from Tin Pan Alley songwriter into offbeat solo artist. As such, half the album's tracklist is taken up by other artists performing Ahbez compositions (e.g. Hey Jacque by Eartha Kitt and Palm Springs by Ray Anthony). These stand as a kind of middle ground between beatnik and hippie, fitting neatly into neither category.

The composer first performed under his own name in October 1951; producer Bob Bertram funded the session, which yielded four unreleased Ahbez recordings. Each are arranged by the Harry Geller Orchestra, with backing vocals by the Randy Van Horn Singers, best known for their zippy chants on Fifties albums by Juan Garcia Esquivel. Two tracks from the session—India and Child Of Nature—are released here for the first time. 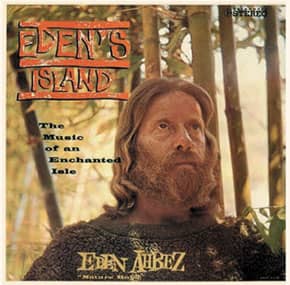 The aforementioned Carmichael—whose Stardust Melody was perhaps the most recorded song of the 20th century—tackled Ahbez's Sacramento in a Decca Records single of 1951. It failed to chart, though Ahbez—who also performed the song with Carmichael on the TV program 'You Asked for It'—took something of a cue from the elder composer.

The Ahbez/Bertram session of 1951 is especially evident, especially the song India. Arranged in the style of Carmichael's Hong Kong Blues, its plunky marimbas, snake-charmer flutes, and orientalist gongs became common in many Ahbez productions, though, according to Michael Cudahy of '90s exotica band Combustible Edison, "there is nothing in the songwriting itself that calls for exotica arrangement, except maybe the lyrics." Cudahy calls Ahbez's writing style "primitive, like something out of the Garden of Eden," and says that he rarely goes beyond two chords, in the diatonic scale.

Where other proto-hippies, like Moondog and Harry Partch, found new intonations and structures in the savage and the arcane, Ahbez was scarcely avant-garde or musically inventive. (In 1951, he was sued by a Yiddish songwriter named Herman Yablokoff, who claimed Nature Boy plagiarized a theater ballad of his from 1935.) Ahbez's originality lay instead with his ability to graft social-consciousness onto the standard form.

As for being covered by the other masters of exotica—Les Baxter, Martin Denny, Arthur Lyman—Ahbez barely passes their radar during the 1950s. None recorded Nature Boy, for instance, though Baxter as copyist for orchestrator Frank DeVol during the late '40s may've actually written the arrangement for Nat Cole's version. Lyman, amazingly, recorded a 1963 version of 'Eden's Island,' the title song to Ahbez's solo album that few in its time even heard. Denny recorded Hong Kong Blues and other Carmichael tunes in the exotica style, but never touched Ahbez.