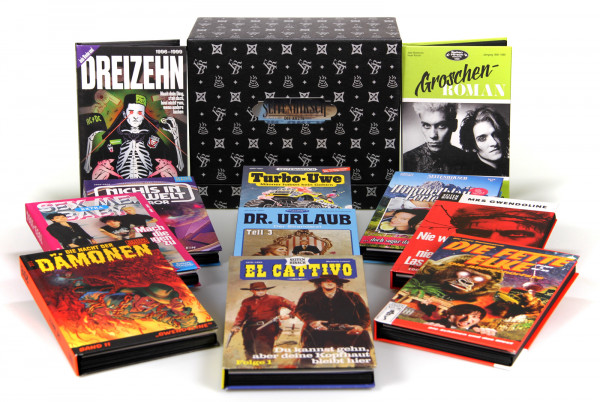 S E I T E N H I R S C H
On November 16th, Die Ärzte will release their complete works as a lavish box set on the label And More Bears, which emerged from the legendary Bear Family* under the patronage of music legend Richard Weize.
Contents: All albums, singles and b-sides are included, as well as songs from the formation phase of the band, rare and curious songs, previously unreleased demos.
and rare studio recordings, including the often mentioned and never released English album. Over 600 songs, all completely remastered.
New and detailed interviews of the band with Anja Rützel and Christoph Dallach, as well as 11 exclusive cover illustrations and many photos round off the work.
The title: "Seitenhirsch"
33 CDs in 11 Mediabooks in special format in a Special Deluxe Box.
Dimensions: 27.5 cm wide, 22.5 cm high, 15.5 cm deep, total weight approx. 5 kg.
RRP incl. VAT: 333.- €
All the previously unreleased bonus material from the box set will be released separately later in spring 2019 under the title "They've given me Schrott! - the Outtakes" will be released as 3-CD-Edition or 4 Vinyl-Edition by And More Bears - definitely neither as download nor for streaming.
The box set and bonus editions are also available from your local retailer - wherever you find good music!
For more than 40 years Bear Family Records / And More Bears founder Richard Weize has been state-of-the-art in the field of box sets and complete editions with his releases and has received numerous awards worldwide. This exhibition of his work is a matter close to his heart and that of Die Ärzte.