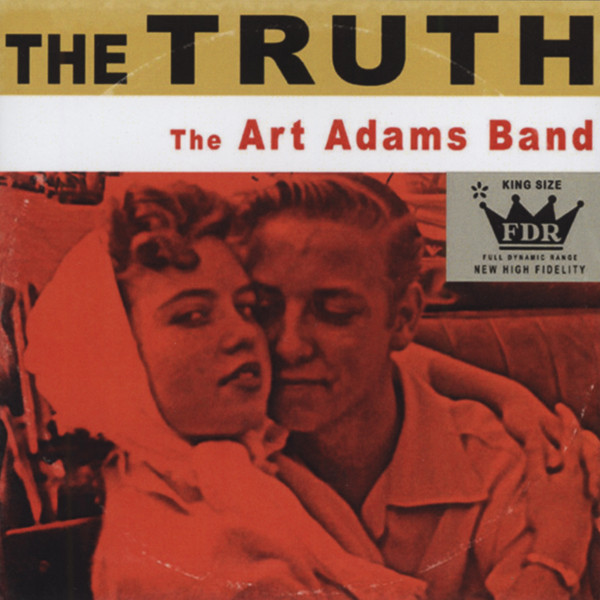 This article is deleted and can no longer be ordered!
Please inform me as soon as the product is available again.
P Secure bonuspoints now
Description
Learn more about Art Adams
Review 0
Description
(2009/Smokin' Ace) 19 tracks (50:05) great new album with a mix of rockin' classics and 4 new Art... more
Close menu

Art Adams is one of several rockabilly artists who made one or two obscure records in the fifties, then quit the music business and went back to performing decades later, after being discovered by (mostly European) music fans.

Born in Kentucky into a musical family, Adams moved to a farm just outside Bean Blossom, Indiana, at the age of twelve. Art's education came to an abrupt end when his parents divorced. He never attended high school and by the age of 15 he was living in Indianapolis where he worked at a shopping bag company where he met his future wife, Tommie Arlene Melton. On February 3, 2009, they celebrated their 58th wedding anniversary. He got married at the young age of 15.

The Kentucky Drifters and Sun Records

Adams was taught to play guitar by his brother-in-law, Dave Logsdon. Together with Danny Cole (bass) and Ray Paley (steel guitar) they formed a country band, The Kentucky Drifters, in late 1954. They cut a demo session at a local Indianapolis radio station and took the results ("Down In Tennessee" and "She's From Tennessee", both written by Art, to the Sun Studio in Memphis after a 700 mile drive. They arrived unannounced only to find out that Sam Phillips was not there. Jack Clement listened to the tapes, said that Adams sounded like Johnny Cash and had to get his own sound. He also said that Sun had too many other artists to deal with then.

Art grew restless with the Kentucky Drifters and wanted to play more rockabilly, whereas Dave Logsdon wanted to stick with country. The band was renamed into The Rhythm Knights in 1957 and reshaped with twin guitarists Roy Robinette and Edwin Weil. The drummer Norm Wagner died at a very young age and was replaced by Bennie Abott, aka Kentucky Curly. They soon acquired a residency at the Playmore Club in Indianapolis (spelled Pla-Mor by Ian Wallis in Now Dig This). In July 1959, Art Adams and the Rhythm Knights signed a three-year contract with the Cherry label (from Scottsville, Kentucky), owned by Joe Dyson. They soon had their first recording session in Nashville. The resultant single paired "Rock Crazy Baby" with "Indian Joe", both songs fiery, primitive rockabilly. A second Cherry single was issued in May 1960, "Dancing Doll"/"She Don't Live Here No More". "Dancing Doll" featured some truly exciting guitar work, but rockabilly of this type was no longer commercially viable in 1960. Moreover with all the band members holding down day jobs, there were very limited opportunities for promotion. Cherry Records reneged on their contract and failed to issue "at least two releases per year for a period of three years", as promised, even though they had finished material in the can , like Art's composition "Honey Girl" and a frenzied instrumental version of "Orange Blossom Special".

In 1961 Art formed a completely new band, The Epics, with Billy Stewart on lead guitar, who has been a vital part of Art's musical life since that time. This was an attempt to update his sound with more of an R&B feel and to secure work in more upmarket venues. Art Adams & The Epics were soon in demand as a backing band, especially for well-known acts who visited Indianapolis and had no backing band of their own. "We backed up people like Jerry Lee Lewis, Dee Dee Sharp, Conway Twitty and Gene Simmons".

The break and the comeback

Art kept on going until about 1968. By then he was building up a vending machine company and had three children, leaving no time for music. So he quit the music business. Forever, he thought.

During the 1980s, Adams received more and more calls from collectors around the world who tried to find his old records. Counterfeit versions of his Cherry recordings began circulating. But it was not until 2003 that the second part of Art Adams' career as a rockabilly singer took off, with the release of his first CD by Cees Klop on his White Label/Collector Records entitled "Rock Crazy Baby", Collector 4477. It contained the four Cherry sides plus alternate takes and a bunch of demos, "Not all of which were really deserving of release", as Ian Wallis puts it. Many tracks sound disjointed or out of tune but the band had a lot of fun recording these typical demos as one can hear.

Two further CD's have been released since then, "Rockin' My Way Around" on Collector in 2005 and "Dancing Doll" on Flying Saucer Records in 2006. Both are newly recorded, primitive and frantic and just great.

Adams' first comeback performance was at Viva Las Vegas in April 2003, followed that same year by gigs in Montreal, Canada, and Hemsby, England. Since then Art has returned to the UK several times and also played in other European countries, like Sweden, France and Spain. He has an energetic stage act and has built up a loyal and enthusiastic following. Today, Adams is backed by Danny Thompson (lead guitar), Mark Cutsinger (drums) and Mike Strauss (bass).

2017 will see an Art Adams EP release of four new tracks eventually recorded at the famous Sun Studio at 706 Union in Memphis on Germany's Bear Family Records label. As a true 1950s original, Art Adams still rocks the world as agile and energetic as back in '59!