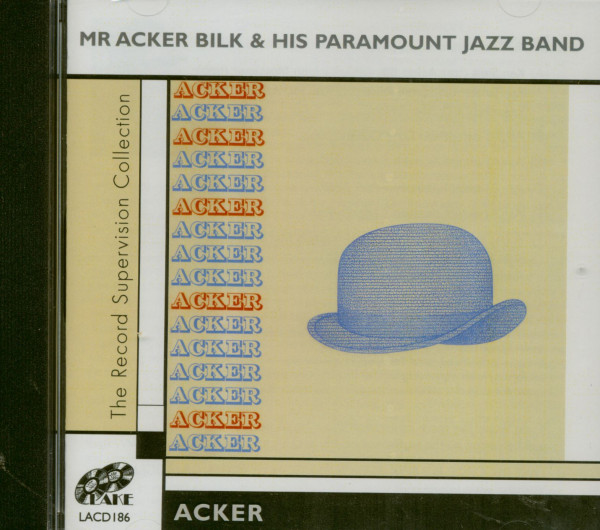 Learn more about Mr. Acker Bilk
Mr. Acker Bilk If you want to make your mark in the music world, it is important to have an... more
Close menu
"Mr. Acker Bilk"

Mr. Acker Bilk
If you want to make your mark in the music world, it is important to have an image, something that identifies you immediately to the general public. You may adjust, change or even drop your image as the years go by. but without it, you might not be known at all.

Acker Bilk's included the unusual name, the Somerset accent, the bowler hat and the striped waistcoat, and the billing itself, "Mr Acker Bilk and his Paramount Jazz Band". Several of his contemporaries — Terry Lightfoot, Mike Cotton, Bob Wallis. Alan Elsdon — did not have such strong trademarks and maybe their careers suffered as a result. One thing is certain: the public took Acker Bilk to their hearts and it wasn't just because he played good music.

Bernard Stanley Bilk was born in Pensford, Somerset on 28 January 1929. His father was a carpenter and church organist, and Acker played the piano and recorder ds a Child. 'He told me: "Everyone had nicknames in the village and I had mine before I went to school. 'Acker' was not just my nickname — there was Acker Withy and Acker Wilson. and it's like calling someone 'mate'. I don't know much about my surname but it's originally French, Bilque or something like. A French guy must have come to Wales, seduced a Welsh maid, promised to marry her, and she got lumbered with the family "

Like the pianists Russ Conway and Bill McGuffie. Acker Bilk is missing part of a finger. "Well, that was when I was 14. We used to hurtle down hills on toboggans when the snow was around. I hit a stone and it took my finger off. A whippet from the farm was sniffing around and he gulped it down, he didn't even chew it. I was chasing after the dog and I was going to say, 'Look, he's keeping my finger warm. Can you open him up?' My right hand is more fluid than my left but as I've never played the clarinet with my whole finger, I don't know the difference. I lost four front teeth when I was at school but I don't think that has had any effect. I hope no one has had his teeth out and finger lopped off to try and sound like me."

Acker planned to be a blacksmith, but his National Service changed that. "I was stuck in the desert for three years in Egypt after the War and we formed a little band. A guy in the tent had an E flat marching clarinet and I was fascinated by it. I drove people crazy trying to find new notes and more or less taught myself as the guy who had it couldn't play it. I may do it all wrong but as I can get the notes I want, it doesn't matter"

And Acker had plenty of time to practice. "We had to do 24 hour guard duty on a weekend, which was a long haul. I fell asleep in the guard room and I got caught and the major put me up for a court martial, really to make an example of me. Lots of other soldiers fell asleep on guard duty, I wasn't the only one, but I was given 84 days in the glass house, which UNDER THE DOU•LE EA was the Moasca Correction Camp. EWER PARADE When you get sentenced, you have to wait for confirmation from HO and they mislaid my papers and I had to wait a month in the guard room rather than in the nick. I had the   clarinet and I was given king beer through the hatch. I had a marvellous time practising until I went to the MCC." ...